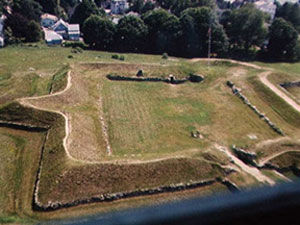 This granite monument was dedicated in 1830 to the men who had defended Fort Griswold. In the centennial year, 1881, the top was enclosed and the monument was increased to a height of 134 feet. The park grounds are open all year from sunrise to sunset.

This colonial house is located on the park grounds, west of the fort. Many Avery men were killed and wounded during the battle. After the battle on the heights, the story goes that some of the wounded soldiers were put in a wagon by the British and rolled down the hill. Occupants of the house brought the soldiers in and tended to their wounds; there is a sign on the house to this affect. It was moved from its original location on nearby Thames Street in 1971.

The Avery Memorial Association and its period contents are either on loan by members or owned by the Association own the house.

There is no admission (cost to visit)  to the park, the Monument, Museum, or Avery House. Donations accepted.

Parking is free on the streets of Monument Street and Park Avenue.
The Connecticut Department of Environmental Protection administers the park.

The Anna Warner Bailey Chapter (1893) of the DAR (Daughters of the American Revolution) meets every second Thursday of the month at noon (12:00 PM).