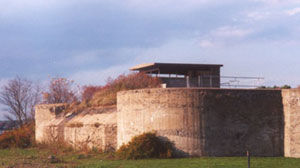 The land for Fort Foster, located on the southwest tip of Gerrish Island in Kittery, Maine, was acquired by the federal government in 1872, making this fort the last of the "old" forts that were built in the Portsmouth area.

The first fortification here, planned in 1873-76, was to be a "Fourth System" 12-gun earthwork and concrete battery known as Battery on Gerrish's Island, or Battery Berry (in honor of Major General Heiram G. Berry of Maine, killed in action in Virginia in 1862), similar to the work that was begun at Fort Stark. It was never fully completed. The parapet and gun platforms were built, but only two traverse magazines were completed. After minor work was again attempted in 1879, it was abandoned. No trace of it exists today. It was located in the area of where Battery Bohlen was later built.

In 1899 construction was started on new concrete batteries to help protect the Naval Shipyard in the aftermath of the Spanish-American War. In 1900 the site was officially named Fort Foster, after Civil War era Brevet Major General John G. Foster of New Hampshire, and the post became a sub-post of Fort Constitution. Battery Henry Bohlen was completed in 1902 (named in 1904, in honor of Brigadier General Henry Bohlen, killed in action in Virginia in 1862), and consisted of three 10-inch 35 cal. breach-loading rifles, Model 1895, serials 1, 13, 14 (Watervliet Arsenal), on disappearing carriages, Model 1896, serials 69, 70, 65 (Walker Co.). Two Hodges back-delivery projectile hoists were installed to supply the shells up to the guns.

Battery Edward Chapin (in honor of Brigadier General Edward P. Chapin, killed in action in Louisiana in 1863) was completed in 1904, and consisted of two 3-inch shielded rapid-fire guns, Model 1902, serials 37, 38 (Bethlehem Iron Co.), on pedestal mounts, similar to Batteries Hays and Lytle at Fort Stark. The two-story wooden Secondary Mine Observation Station (M") was built in 1909 behind Battery Chapin, which complimented the primary mine station (M') at Fort Stark (which was later moved to a two-story wooden station at Fort Constitution). They were used to triangulate the position of ships in the harbor mine field. All that remains today is the tall concrete pedestal base for the depression-position range-finding (DPF) instrument. A few other structures were also built during this time, including the 560-foot pier jutting out into the harbor (since rebuilt).

Thanks to Pete Payette at American Forts Network for the above picture and information.

Gate attendants may open the park on weekends in May before Memorial Day and September after Labor Day from 10:00 a.m. to 8:00 p.m. or sunset, whichever is earlier. Call ahead to ensure accessibility.

There shall be no persons permitted except for authorized personnel within the park from sunset to sunrise.

Pedestrian/foot traffic will be allowed from sunrise to sunset from October 1 to April 30 and weekdays in May before Memorial Day and in September after Labor Day. During these off season times the park is closed to unauthorized vehicular traffic including motorcycles, snowmobiles and all terrain vehicles. Inbound gate closes 30 minutes prior to closure.

Day-use visitor walk-ins or bike-ins shall pay $5.00 per adult and $1.00 per child under twelve years of age.