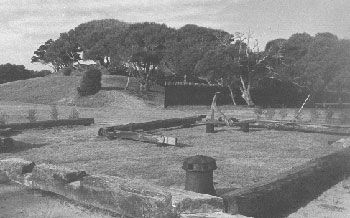 Until the last few months of the Civil War, Fort Fisher kept North Carolina's port of Wilmington open to blockade-runners supplying necessary goods to Confederate armies inland. By 1865, the supply line through Wilmington was the last remaining supply route open to Robert E. Lee's Army of Northern Virginia. When Fort Fisher fell after a massive Federal amphibious assault on January 15, 1865, its defeat helped seal the fate of the Confederacy. Visitors are invited to tour the remains of the fort's land face, which features an impressive reconstruction of a 32-pounder seacoast gun at Shepherd's Battery. Shaded by gnarled live oaks, a scenic trail leads tourists from the visitor center past the gigantic earthworks and around to the rear of the fort. Guided tours and wayside exhibits provide historical orientation. Other exhibits include items recovered from sunken blockade-runners.

At the dawn of the American Civil War, the Confederacy took control of a neck of land in southern North Carolina near the mouth of the Cape Fear River and constructed what was to become the largest and most important earthwork fortification in the South. Two major battles were fought there, and many Union soldiers received the Congressional Medal of Honor for their gallant participation in that fighting. Today only a few of the mounds remain, since much of the fort has been eroded by the ocean.

Until the arrival of Col. William Lamb in July 1862, Fort Fisher was little more than several sand batteries mounting fewer than two dozen guns. Under Colonel Lamb's direction and design, which was greatly influenced by the Malakoff Tower (a Crimean War fortification) in Sebastopol, Russia, expansion of the fortress began. By January 1865, Fort Fisher embraced one mile of sea defense and one-third of a mile of land defense. More than five hundred African Americans, both slave and free, worked with Confederate soldiers on construction; occasionally as many as one thousand men were working, although maintaining adequate labor was difficult.

Unlike older fortifications built of brick and mortar, Fort Fisher was made mostly of earth and sand, which was ideal for absorbing the shock of heavy explosives. The sea face, equipped with 22 guns, consisted of a series of 12-foot-high batteries bounded on the south end by two larger batteries 45 and 60 feet high. Of the smaller mounds, one served as a telegraph office and another was converted into a hospital bombproof. The land face was equipped with 25 guns distributed among its 15 mounds. Each mound was 32 feet high with interior rooms used as bombproofs or powder magazines and connected by underground passageways. Extending in front of the entire land face was a nine-foot-high palisade fence.

Colonel Lamb recognized the importance of Fort Fisher to the defense system of the Cape Fear, to the security of Wilmington, and to the survival of the entire Confederacy. Massive and powerful, Fort Fisher kept Federal blockading ships at a distance from the Cape Fear River, protecting Wilmington from attack and ensuring relatively safe passage for Confederate naval travel. Wilmington was the last major port open to the Confederacy and the destination of steamers called blockade-runners, which smuggled provisions into the Southern states and supplied General Lee's Army of Northern Virginia. These ships traveled from Bermuda, the Bahamas, and Nova Scotia, where southern cotton and tobacco were exchanged for food, clothing, and munitions from British traders.

The tour trail is approximately one-quarter-mile long and encircles the remains of the fort on the river side of the highway. Exhibit panels containing photos and text are located at many locations along the tour trail. A restored gun emplacement is located on top on one of the batteries. Battle Acre, a monument to Confederate dead, is located on the ocean side of U.S. 421. A pavilion located at the northern end of the parking lot houses a display on underwater archaeology.

The visitor center and rest rooms are fully accessible. The tour trail is also accessible with assistance, but the restored gun emplacement is not.

At scheduled times throughout the year, costumed guided tours tell the story of the Confederate artillerists and U.S. infantrymen. Guides teach participants the "drill" with wooden rifles. Participants also learn the artillery drill (non-firing) on a bronze 12-pounder gun. Staff and volunteers also fire the 12-pounder throughout the year. A 24-pounder Coehorn mortar is also live fired, with a ball!

Regular guided tours are given daily on a scheduled basis:

The 9:30 tour is only available from April through October. We ask that groups make reservations in advance.

No admission fees. There is a suggested donation at some special events.

From Southport take the Southport-Fort Fisher Ferry. This thirty-minute ride takes you to the end of Federal Point. Take U.S. 421 north for two miles; Fort Fisher is on the left.