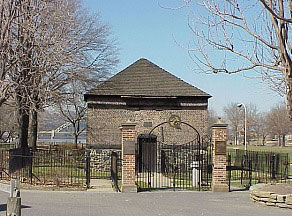 Few places in America can rival the Point, a small area at the forks of the Ohio River, for historical significance. The long contest (1755-1763) between France and Great Britain that started here would develop into an epic struggle between the two imperial powers--what many regard as the first truly world war. On the fate of the Point would hinge that of half of the North American continent, as well as the destiny of the republic that would come into existence in 1776.

The area known today as Point State Park was extremely valuable in the mid-1700s.  For the French, the Ohio River represented the only way to connect their colonies in New France (present day Canada) to their colonies in Louisiana.  By controlling the Ohio River, the English would be able to expand their Colonial power beyond the Appalachian Mountains.  During the French and Indian War, both colonial powers were willing to sacrifice human lives and enormous amounts of money for the control of this valuable piece of land.  Caught in the middle between the two of Europe’s most powerful nations, Native Americans strove to preserve the culture and the lands they knew.

In April of 1754, a force of 500 French troops and Native Americans overwhelmed a small Colonial garrison at Fort Prince George, taking the Point without a single shot being fired.  Afterwards, the French began construction of Fort Duquesne. On May 28th 1754, a small group of Colonial troops led by Major George Washington fired on a group of French soldiers in an event known as the Jumonville Affair.  In retaliation, 900 French and Indian soldiers attacked Fort Necessity, forcing Washington to surrender on July 4th 1754. General Edward Braddock led the first direct attack on Fort Duquesne; the attack ended at the Battle of the Monongahela where two thirds of Braddock’s 1,500 troops were killed or wounded in a devastating defeat. Finally, an army of over 6,000 British and Colonial soldiers led by General John Forbes reclaimed the Point once and for all for the British Empire on November 25, 1758. 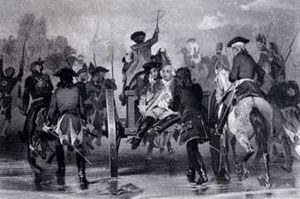 General Edward Braddock lies dying on a caisson during his army's hasty retreat after a surprise attack by French and Indian forces in 1755. Photo from the book, Encyclopedia of American Indian Wars, by Jerry Keenan.

Once General Forbes secured the Point, he renamed Fort Duquesne, Pittsborough in honor of the Prime Minister of England, William Pitt.  Fort Pitt, as it was named, became one of the largest English strongholds in North America.  Though never attacked by the French, Native American forces from May 27 to August 9, 1763 besieged Fort Pitt.  Only Fort Pitt, Fort Ligonier, and a handful of other outposts on the frontier successfully withstood the Native American attacks during the conflict known as Pontiac’s War.  Colonel Henry Bouquet led British troops in a victory over Native American forces in the Battle of Bushy Run, thereby lifting the siege on Fort Pitt.

After years of only being a garrison town, the city of Pittsburgh began to develop by 1790. With frontier expansion booming, Pittsburgh became the gateway to the west during the eighteenth century.  Because of the discovery of valuable natural resources in the area and reliable river passages, Pittsburgh’s industry and commerce exploded in the nineteenth century.  Gristmills, printing shops, glassworks, and the iron industry flourished in the Pittsburgh area.  Since Pittsburgh was and is an ideal location for river travel on the forks of the Ohio, millions of people heading west traveled through the area. With heavy river traffic, accessible natural resources, and diverse commerce and industry, Pittsburgh truly was the “Workshop of the World.” Twentieth century Pittsburgh continues to innovate and experiment with urban redevelopment.  By creating clean, scenic areas such as Point State Park, Pittsburgh has become a worldwide example of a new age “renaissance” city.

The Fort Pitt Museum is located in a re-created 18th century bastion of the fort that Great Britain built in 1759, after it captured the Point from the French; the outline of the French Fort Duquesne, built in 1754, is nearby. The Museum's exhibits focus on the struggle that exploded into the French and Indian War (sometimes referred to as The Seven Year War or the War for Empire) but also addresses such topics as the American Revolution, the Whiskey Rebellion of 1794, and the founding of the city of Pittsburgh.

The only structure that stands as a reminder of Fort Pitt is Pittsburgh’s oldest building, Bouquet’s Blockhouse.  Not only is the building the oldest building Pittsburgh has to offer, but the building is the oldest authenticated structure west of the mountains.  Dated to 1764, it served as a retreat from invading forces.  Today, the blockhouse still stands as a final link to the original 18 acres that became the city of Pittsburgh.  The Daughters of the American Revolution (DAR) administer the Blockhouse.

Housed in the Monongahela Bastion, one of the three recreated defensive earthworks in Point State Park, Fort Pitt Museum offers a wide variety of exhibits and dioramas that cover from the early French expeditions into this region, to the beginning of Pittsburgh’s industrial age.  Visitors can explore the inside of a fur trader’s cabin or see the uncomfortable surroundings that a soldier’s barracks can offer, while they learn about life at a frontier outpost during the colonial period.  The 16-foot wide well in the center of the William Pitt Memorial Hall contains a model of Fort Pitt.

* Take 376 West to the Stanwix St. Exit. Make a Left at the Red Light onto Fort Pitt Blvd.  Bear Right at the Y onto Commonwealth Place.  Parking is available to your left.

* Take to 279 North through the Fort Pitt Tunnels and across the Fort Pitt Bridge.  Take the Blvd. of the Allies Exit.  Make a Right at the Red Light onto Commonwealth Place.  Parking is available to your right.

* Take 279 South across Fort Duquesne Bridge.  Take the 376 East Exit and watch for the Stanwix St. Exit (turnaround).  Make a Left at the Red Light onto Fort Pitt Blvd.  Bear Right at the Y onto Commonwealth Place.  Parking is available to your left.

* Please see From the SOUTH directions.

Fort Pitt Museum is located inside Point State Park on Commonwealth Place in the city of Pittsburgh. Various parking garages are available.