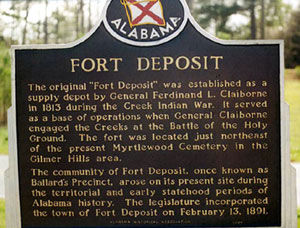 The original site of Fort Deposit can be seen today. This is where General Claiborne, under orders from Andrew Jackson set up an ammunition supply fort in 1813 for the purpose of defeating the Creek Indians which occurred at the Battle of Holy Ground.

This historic site is currently unmarked but is located directly behind Edgewood Manor Apartments across from the Fort Deposit water tower and Myrtle Wood cemetery. Entrance through a small wooden gate to the left of the housing community begins the adventure down Bartum Trail which was changed to Jackson Road and went through the fort.

As you walk the trail you will see the well which provided water for the infantry members stationed here as well as the nearly dried up creek bed which was used to water the horses.

This fort sits on a bluff overlooking the creek bed and is the highest point between Montgomery and New Orleans. Originally named Fort Deposite or The Fort of Deposit, it was changed to Fort Deposit on Dec. 23, 1813 following the Battle of Holy Ground (30 miles north near present day White Hall) which took the Creek Indians out of this part of the country. At this point in time Fort Deposit was part of the Mississippi territory as Alabama didn't become a state until 1819.