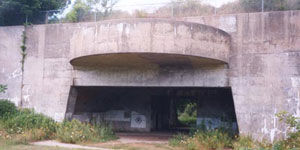 In the dense growth of shrubs and vines covering much of the park's 330 acres, remnants of Odiorne's past silently remain. . . reminders of other eras and stark contrasts...idyllic summer estates and gaunt reminders of coastal fortifications. In terms of man and his settlement of this coastal land, Odiorne Point remained a true wilderness until almost 400 years ago. During summer migrations, Native Americans of Pennacook and Abnaki tribes visited the area which they called Pannaway. Permanent settlement began in the 1600s.

In 1623 an agent of England's Council for New England came to fish and trade in the New World. David Thomson journeyed to New England on the ship Jonathan to establish the first New Hampshire settlement at what would become Odiorne Point. Many others followed, and the original settlement grew and spread along the coast and up the river.
John Odiorne joined the settlement in 1660. He acquired several acres of land from the shoreline west into the marshes beyond. Like the others, he farmed and fished. The Odiornes remained on the property for several generations, always a part of the continuing changes in the Odiorne Point community.

By the 1700s the settlement was well established, but the governing and trading activities had moved north into the deep harbor area of Strawbery Banke (now Portsmouth). The farms of Odiorne Point helped to feed the burgeoning port of Portsmouth for about 150 years.

After the Civil War, farming gradually gave way to a colony of hotels and large summer homes. Generations of families spent their summers by the sea. In this era of large seaside resorts, a grand hotel called the Sagamore House was built on the property. Over the years, smaller parcels of land were sold for summer homes and estates. Formal gardens and tree-lined drives ornamented the properties. By the late 1930s, 17 families lived on Odiorne Point, including an eighth generation descendent of John Odiorne and the last of the Odiornes to live on the ancestral homestead.World War II brought drastic changes to the landscape and to the lives of these people who loved their land by the sea. In 1942, the federal government purchased all the property from Little Harbor to the Sunken Forest, as well as the adjacent marshland. Within a month the Odiornes and their neighbors were gone.

Military structures were quickly built to house personnel, armaments and supplies. Massive concrete casements, often called bunkers, were constructed and camouflaged with thick vegetation. Because of their open aspect to the sea, many of the estates were demolished, and Route 1A was closed. Odiorne Point became known as Fort Dearborn, and for nearly 20 years, was part of the chain of coastal defenses that protected Portsmouth Harbor and the Naval Shipyard. In the late 1950s, Fort Dearborn was declared surplus property. It was sold to the State of N.H. for $91,000 in 1961.

Route I-93 & I-95 are the gateway highways to New Hampshire.

From I-93:
To Route 101 east to I-95 North to exit 5, Portsmouth Traffic Circle. Go 1/4 around the circle to Route 1 By-Pass south to Route 1 south. Take a left onto 1A south at the traffic lights at Elwyn Road. Follow Route 1A south for several miles and Odiorne State Park will be on the left.

From I-95:
I-95 North to exit 5, Portsmouth Traffic Circle. Go 1/4 around the circle to Route 1 By-Pass south to Route 1 south. Take a left onto 1A south at the traffic lights at Elwyn Road. Follow Route 1A south for several miles and Odiorne State Park will be on the left.