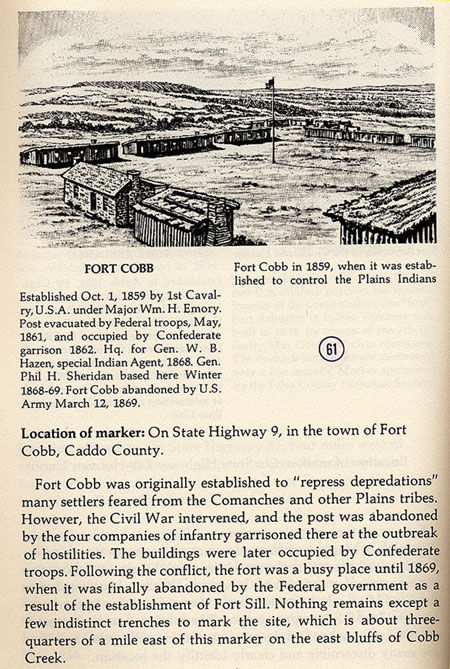 The above information is from the book, Mark of Heritage, by Muriel H. Wright,
courtesy of Oklahoma Historical Society.

On August 1 the work of removing the Indians from Texas began. As upon other occasions when a people have been deported from their native land, it was a sad affair. There was so much haste to get the Indians away before the Texans attacked them that the Indians were unable to round up their cattle. Mr. Neighbors was in charge, and he was assisted by Agents Blain, S.P. Ross, and Mathew Leeper. A military escort of two companies of cavalry and one company of infantry under Major George H. Thomas, the future "Rock of Chickamauga," accompanied the long column. Horace P. Jones, Phillip McCusker, and several other civilians came along as interpreters, employees of the agency, and the like.

The above story is from the book, Carbine & Lance, The Story of Old Fort Sill, by Colonel W.S. Nye; Copyright © 1937 by the University of Oklahoma Press. Reprinted by permission. All rights reserved.

The United States began considering a location in Indian territory for the tribes on the Texas reservation. In 1859, the commander of Fort Arbuckle, Major Emory, found what he considered to be a good location at Medicine Bluff in the Wichita mountains. Elias Rector, the senior superintendent for Indian affairs, had final approval so Major Emory provided him with an escort of fifteen soldiers under the command of Lieutenant David Stanley. Rector, accompanied by Samuel A. Blain, agent of the Wichitas, and Horace P. Jones, guide, and several Caddo and Wichita chiefs left Fort Arbuckle, June 18, 1859. The four day trip was apparently unpleasant for Superintendent Rector, as he openly detested the site of his destination.

Maj. Robert H. Neighbors was forced to turn over his wards to the Indian agent in Oklahoma. That night he wrote his wife in Texas.

I have this day crossed all the Indians out of the heathen land of Texas and am now out of the land of the Philistines.

If you want a full description of our Exodus… read the "Bible" where the children of Israel crossed the Red Sea. We have had about the same show, only our enemies did not follow us…

The following indented story is from the book, Carbine & Lance, The Story of Old Fort Sill, by Colonel W.S. Nye.

Mr. Blain's appointment left Leeper and Ross without jobs. They went back to Texas with Neighbors. On his return to Belknap Neighbors was murdered by Ed Cornett, a stranger to him, who resented his partisanship to the Indians in the troubles between the Native tribespeople and the settlers.

…The military post of Fort Cobb was established October 1, 1859, by two companies of the First Cavalry (formerly the First Dragoons) and one company of the First Infantry, under Major W.H. Emory. It was built of pickets and adobe, on the high ground east of the present townsite. Camp Radziminski then was abandoned by the army, but immediately was reoccupied by a regiment of Texas Rangers. The latter remained at Radziminski for a year, patrolling the border and skirmishing with the wild Indians. In the late summer of 1860 they marched north, accompanied by some Tonkawas, Caddoes, and Wichitas. They attacked a camp of Kiowas and Comanches near the head of the Canadian, in the country now known as the Panhandle of Oklahoma.

War brought turmoil to Indians living in Kansas and the Indian Territory, with unfortunate results for Texans on the frontier. Most Cherokees, Choctaws, Creeks and Seminoles aided the South, while others adhered to the North. Few Comanches made a treaty with the South; but a great majority with their allies, the Kiowas, held aloof from either side and plundered the frontier at will. Apaches and Kickapoos did the same from Mexico. Texas and Confederate troops, despite poor arms and mounts, held defensive outpost until war's end.

The Union troops from Forts Cobb, Washita and Arbuckle retreated north into Kansas when the Civil War broke out. Confederate soldiers garrisoned Fort Cobb. Mathew Leeper was agent, he retained the assistance of Horace Jones and J.J. Sturms. The Civil War broke out among the reservation Indians. The civilized tribes, Cherokee, Choctaw, Chickasaw and Seminole were large slaveholders and so seceded from the Union. The Creeks, Shawnee, Delawares and some Cherokees sided with the Union. The Wasp Comanches only wanted to continue raiding Texas so Chiefs Silver Broach and Milky Way made no trouble on the reservation. Buffalo Hump, the third major Wasp chief, sensed weakness and demanded Leeper have the government build him a house. He caused such a ruckus around the agency that the Caddoes and Tonkawas also became surly and threatened to join the Union. 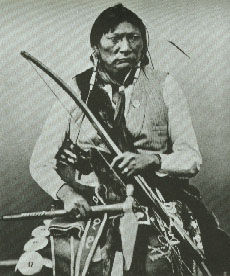 Confederate Brigadier General Albert Pike arrived in Fort Cobb in 1861 to make "A Treaty with the Comanches of the Prairies and Staked Plains." The Confederate government provided sixty thousand dollars in goods to the Comanches and Kiowas, who had been at war with the Union "Bluecoats" for over two years. The gifts prevented Indian raids into Texas for several years. September, 1862, Leeper heard rumors that Union Indians were on their way to kill Tonkawas and Confederate officials and took his family to a safe place, leaving Horace Jones in charge.

Again we give you a story from the book, Carbine & Lance, The Story of Old Fort Sill, by Colonel W.S. Nye.

At this time the Tonkawas were living along the Washita, south of the agency. Hearing the uproar they abandoned most of their belongings and fled east. Before daylight they halted and camped in a valley southeast of the site of Anadarko, near the site of the present Catholic mission. They thought they were safe. But the other Indians had trailed them there, and had surrounded the camp. A merciless attack was made. The Tonkawas were almost exterminated. Among those slain was the chief of the band, Placido. The few who escaped found refuge at Fort Arbuckle, then later went to Fort Griffin, Texas. The bones of their people lay bleaching for many years in what is now called Tonkawa Valley.

The Confederates never reoccupied Fort Cobb. The semi-tame Indians who had been attached to the agency were left to shift for themselves.

The following story is from the book, Comanches, The Destruction of a People, by T.R. Fehrenbach.

There was a series of massacres and retaliations between the reservation or agency Indians. The Tonkawa remnants that had been removed to Oklahoma by Neighbors were almost exterminated, ostensibly because of their "cannibalism," but more likely because the tribe's services as scouts for the Texans had made them hated by the other Amerindians. Federal agents also filtered back into the Indian Territory by 1862. Some tribes changed sides: the Cherokees defected and rejoined the Union. And in October 1862, "Union" Delawares and Shawnees raided and destroyed the Confederate Wichita agency. The Pehnahterkuh Comanches were dispersed into the Wichita mountains, and the link between the Plains bands and the Confederates was broken.