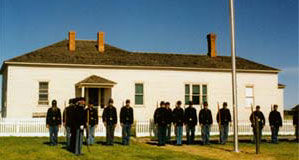 Fort Buford, located near present-day Williston, was one of a number of military posts established to protect overland and river routes used by immigrants settling the West. While it served an essential role as the sentinel on the northern plains for twenty-nine years, it is probably best remembered as the place where the famous Hunkpapa Sioux leader, Sitting Bull, surrendered in 1881. 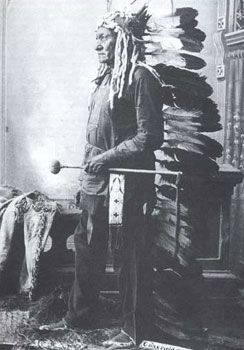 Photo of Sitting Bull from the book, Encyclopedia of American Indian Wars, by Jerry Keenan.

On June 15, 1866, soldiers under the command of brevet Lieutenant Colonel William G. Rankin commenced building a new fort in Dakota Territory. It was named after the late Major General John Buford, hero of Gettysburg. By the end of November, the finished fort consisted of a 360-foot-square stockade, enclosing log and adobe buildings, which was constructed to house a single company garrison.

Although historically the Fort Buford region was claimed by the Hidatsa, the Sioux controlled the area after the Hidatsa population was decimated by smallpox. The Sioux, angered by the establishment of the fort, attacked a work party at the sawmill on December 21, 1866. Raids continued sporadically throughout the winter. Post Surgeon James P. Kimball noted that these attacks were led by Sitting Bull.

During January, Rankin received orders that the strength of the garrison would be increased by four additional companies that would arrive in the spring. Construction of a larger fort to house the new troops began in 1867. The old stockade was partially demolished and original buildings were either remodeled or torn down. The new fort measured 999 feet by 600 feet and was enclosed on three sides by a twelve-foot stockade. Unfortunately, the buildings were constructed from handmade adobe bricks and green lumber, which causes deteriorations within three years. The deplorable condition of the buildings, as well as increased Indian attacks, necessitated the construction of an expanded fort in 1871-1872. As part of the third construction phase, the post was designed for ten companies but was ultimately built to house six companies.

The 7th Cavalry, with its support column and wagons, during the Black Hills Expedition of 1874. Lieutenant Colonel Custer heads the column, wearing light-colored buckskins and riding a dark horse. (National Archives) While the fort construction was underway, the Northern Pacific Railway resumed survey activities west of the Missouri River. These Yellowstone expeditions of 1871-1873 and the Black Hills expedition of 1874 violated the Treaty of 1868. The Sioux were provoked and felt the president of the United States "must stop the railroad" because it would destroy or chase away wildlife. They would not let the invasion of their lands go unchallenged.

By late 1875, the situation had deteriorated to the point that the secretary of interior asked the secretary of war to force Indians onto their respective reservations. This action began the Sioux Wars of 1876-1879 that included the defeat of Custer at the Battle of Little Bighorn and Sitting Bull's flight into Canada. Sitting Bull struggled to maintain his independence, but lack of natural game for hunting and the desire of his people to return to their relatives led him to return to Dakota Territory. Thirty-five families, 187 people in all, traveled with Sitting Bull to Fort Buford, where on July 20, 1881, the great Sioux chief surrendered his Winchester .44 caliber carbine to Major D.H. Brotherton, Fort Buford's commander.

The role of the army at Fort Buford for the next fifteen years was to protect survey and construction crews of the Great Northern Railway, to prevent Indians and Métis from crossing the international boundary from Canada, and to police the area against outlaws. By 1895 the Fort Buford buildings were so dilapidated that repairs were deemed too expensive to undertake. Because the fort was no longer necessary for the mission of the army, it was abandoned on October 1, 1895. 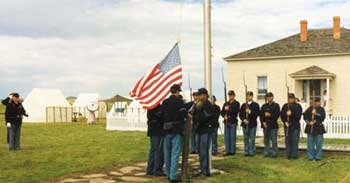 Currently, three original buildings stand at Fort Buford State Historic Site: the stone powder magazine, wood-frame officers' quarters, and a wood-frame officer of the guard building. Inside the officers' quarters is a museum exhibit and interpretive center featuring artifacts and displays about the frontier military and Fort Buford's role in the history of Dakota Territory. A modern restroom and office building and the site supervisor's home are located across the road from the museum. Although the original guardhouse is gone, its "ghost" remains. A metal framework outlines the building showing its original size and shape, while preserving the original foundation.

Southwest of the museum is the fort cemetery. After the fort was abandoned, all military personnel buried at Fort Buford were disinterred and removed to the national cemetery at the Little Bighorn Battlefield National Monument in Montana. Reconstructed wooden headboards mark the graves where soldiers were once interred. As far as it is known, the graves marked by civilian headstones still contain the bodies of those interred there.

The confluence area adds a wealth of attractions. The Fort Buford site includes a picnic area, campground, and every spring a large paddle-fishing operation attracts hundreds of sportsmen. In July of every year the 6th Infantry reenactment group holds its annual Fort Buford Sixth Infantry Frontier Military Encampment. A few miles away, Fort Union Trading Post National Historic Site interprets the fur trade that made the confluence a nineteenth-century crossroads and a historic, exciting place to be! Fort Buford is located just off Highway 23 about twenty-five miles southwest of Williston, Williams County.

There is an admission fee of $5.00 per adult and $2.50 per child. The fort is open year around, subject to the weather. School groups are $1.00 per student, adults with students get free admission. Tour buses are $2 per person for groups of 20+. North Dakota Heritage Foundation members and children five and under are admitted free; school groups pay reduced admission. Brochures describing the site are available at the site or from the State Historical Society of North Dakota.