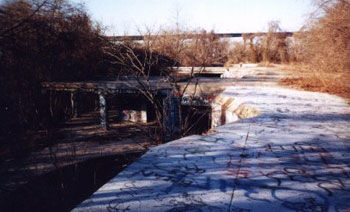 An Endicott period fort named in honor of Major George Armistead, commander of Fort McHenry during the famous 1814 bombardment from the British Fleet. It is located at Hawkins Point next to the Key bridge. Batteries here are Battery Winchester (1900-1918), Battery McFarland (1900-1917), Battery Irons (1900-1913), and Battery Mudge (1901-1920), which is partially destroyed. A mine casemate is located behind Battery Mudge.

This fort had a short and uneventful history.

Thanks to Phil Payette at American Forts Network for the above picture and information.