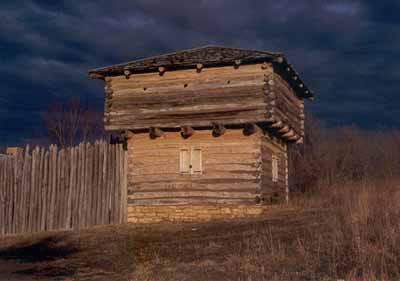 The Apple River Fort was the site of an important battle during the Black Hawk War. It was the only fort attacked by Black Hawk during the turbulent summer of 1832. On June 24, 1832, the settlers at the fort turned back an attack by some 200 Sauk and Fox warriors led by Black Hawk. The war, which lasted only 16 weeks, ended the threat of Indian attacks in the area and opened the region to further settlement. Many notable men participated in the Black Hawk War including a young Abraham Lincoln, Jefferson Davis, and General Winfield Scott. Abraham Lincoln and his militia company arrived at the fort the day after the battle. 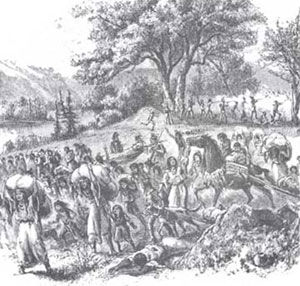 Fleeing bands of Sauk and Fox Indians were caught and attacked by American troops in Wisconsin, resulting in the Battle of Bad Axe. Photo from the book, Encyclopedia of American Indian Wars, by Jerry Keenan.

Today, the fort has been reconstructed and is open for self – guided tours. Special events throughout the year highlight many aspects of life in Jo Daviess County in 1832. Exhibits at the Interpretive Center, on the trail, and at the fort tell the story of the Sauk and Fox, the early settlers, and the conflict that became known as the Black Hawk War. 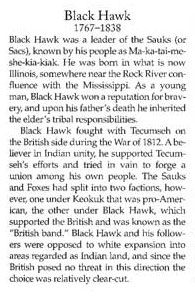 Two photos above are from the book,
Encyclopedia of American Indian Wars, by Jerry Keenan.

The Black Hawk War, one of the so-called Indian Wars, was fought in northwest Illinois and what is now southwest Wisconsin in 1832. It pitted a band of Sauk and Fox, led by Black Hawk, against the Illinois militia and the U.S. Army. The conflict had its roots in a controversial 1804 treaty in which the Sauk and Fox ceded 50 million acres to the United States for $2,234.50 plus a $1,000 per year annuity. Under the terms of the treaty, the tribes could continue to live on the land until it was sold.

The discovery of lead in the Galena area during the 1820s brought many miners to the area. Nearby, at the Apple River settlement, the miners built a cluster of cabins and in 1827 opened the first general store. When the Sauk and Fox returned from their winter hunt early in 1829, they found settlers living in their villages. Later that year, their land was offered for sale and the Sauk and Fox were forced to relocate on the west side of the Mississippi River.

Black Hawk, a Sauk warrior who had fought with the British against the United States in the War of 1812, was determined to return to the land he believed belonged to his people. On April 5, 1832, he started up the Rock River with a band of 500 warriors and about 700 women, children, and old men. Governor Reynolds immediately called out the militia, and when Black Hawk’s warriors routed the militia at the Battle of Stillman’s Run on May 14th, the Black Hawk War had begun.

The settlers in the mining area were panic stricken. Many left Galena by steamboat. At the Apple River Settlement, the miners quickly built a fort around existing cabins. They had not long to wait. On June 24th, Black Hawk and some 200 warriors attacked the Apple River Fort. Inside, the men kept up a steady stream of fire, aided by the women, who molded musket balls and loaded weapons. The battle raged for about 45 minutes. Then Black Hawk, thinking the Fort heavily armed, abandoned the battle, raiding nearby cabins for supplies as he and his warriors departed. The next day, at the Second Battle of Kellogg’s Grove, the arrival of U.S. Army troops forced Black Hawk to flee north to Wisconsin. Finding his band hungry and disheartened, Black Hawk decided to lead his followers west across Wisconsin and back into Iowa. Pursued by the Army and the militia, Black Hawk’s band struggled on to the Mississippi at the mouth of the Bad Axe River. The Black Hawk War ended August 2nd,when the Indians were caught between the steamboat Warrior and the Army troops. Of the 1,200 who had started out with Black Hawk, only about 150 survived. Black Hawk escaped but was later captured. The Apple River Fort, hastily erected that May, survived its first and only attack that June Sunday. It was torn down some 15 years later in 1847, its lumber used to build a barn.

John Tebbel and Keith Jennison point out in their book, The American Indian Wars, that Carl Sandburg described the Black Hawk War with a poet's eye: "And now over the rolling prairie and the slopes of timber bottoms along the Rock River, with a measureless blue sky arching over them, the red man and the white man hunted each other, trying to hand crimson death to each other. As they hunted they measured small and were hard to see, each trying to hide from the other till the instant of clash, combat, and death-bipeds stalking each other; only keen eyes could spot the pieces of the action and put together the collective human movement that swerved, struck, faded, came again, and struck, in the reaches of rolling prairie and slopes of timber bottom where the green, rain-washed bushes and trees stood so far, so deep under the arch of a measureless, blue sky." 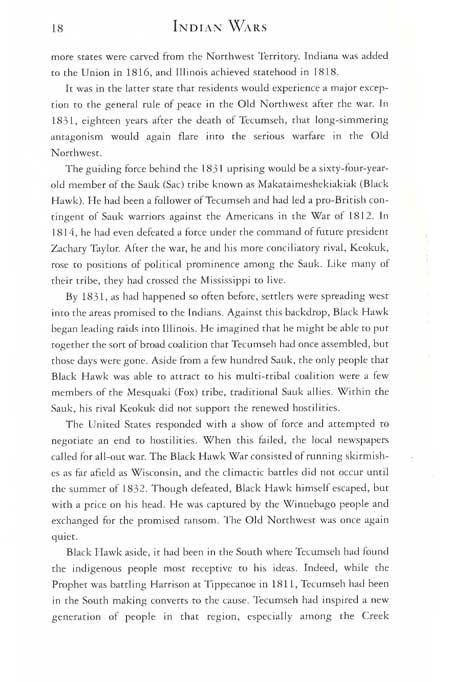 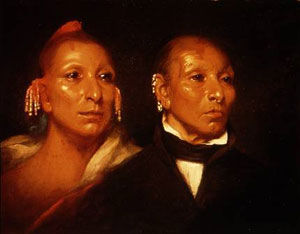 Picture of Black Hawk and Son painted by John Jarvis

In the spring of 1995, the Apple River Fort Historic Foundation set out to locate the Apple River Fort, which had been torn down in 1847, fifteen years after the Black Hawk War attack. Local lore said the Fort was located on a hillside not far from Main Street Elizabeth. Uncertain, the Foundation hired an archaeologist, whose initial inspection of the site turned up a variety of artifacts from the 1830s. Excavations revealed musket balls, a small cellar, and a trash pit, but also the fort’s footprint, a 50 by 70 foot area, somewhat smaller than originally speculated.

Rebuilding the fort’s cabins began in 1996, with volunteers using the same tools and materials used by the original settlers. Logs were tripped and shingles split by hand. A 2- to 3- foot trench was dug to connect the two cabins and a surrounding palisade was erected using 14- to 15- foot logs. Constructing a second story that projected some two feet over the building’s lower story created the blockhouse. At the two corners opposite the buildings, firing stands were built and supplied with hand-hewn ladders.

Located a short walk from the fort, the Interpretive Center and Museum Shop relates the story of the Black Hawk War and the Apple River Fort. A series of illustrated panels tells the story of the Sauk and Fox, the early miners, and the conflict between the two cultures that led to the Black Hawk War. Other exhibits at the two-story Interpretive Center include a 15-minute video of the Black Hawk War and archaeology exhibits telling how the fort was located and displaying some of the artifacts uncovered at the site. Exhibits along the trail to the fort explore the role of Abraham Lincoln and other notables in the Black Hawk War, the building of the fort, and the June 24, 1832 attack by Black Hawk and his warriors. Because of its rich archaeological remains and historical significance, the Apple River Fort site is listed in the National Register of Historic Places, the official federal list of districts, sites, buildings, structures, and objects significant in American history.