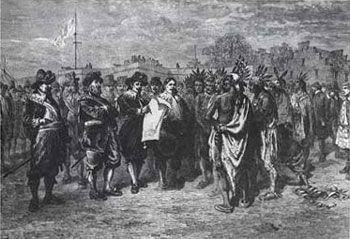 Picture of Dutch Envoys Discussing a
Treaty with the Indians at Fort Amsterdam.
Photo from the book, Encyclopedia of American
Indian Wars by Jerry Keenan.

Fort Amsterdam, 1626, New York County, New York. The Dutch West India Company (1621-1791), was a trading and colonizing company chartered by the States-General of the Dutch republic in 1621 and organized in 1623. The company founded (1626) Fort Amsterdam, which grew to be called New Amsterdam (now New York City). British renamed Fort James Aug 1664 until 1687-1703 when it was renamed Fort George. Briefly reoccupied by the Dutch 1673-74 as Fort Willem Hendrick. Destroyed by Americans 1776. On the site of what is now the Old Custom House at the foot of Broadway.