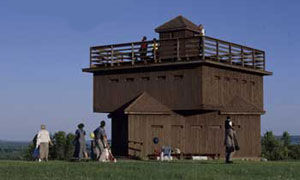 Fort Abraham Lincoln State Park in North Dakota is one of the outstanding historic areas within the state. The park is made historically important because within its boundaries are the ruins of On-A-Slant Mandan Indian Village and the Fort Abraham Lincoln cavalry and infantry posts.

The land itself was deeded to the state in 1907 by President Theodore Roosevelt. Park development started in 1934 by the Civilian Conservation Corps (CCC), who built the visitor center, earthlodges, blockhouses, shelters and roads, and placed cornerstones to mark buildings at the infantry and cavalry posts.

Additional development took place in the late 1980s and 1990s, with the reconstruction of the commanding officer's house, commissary storehouse, enlisted men's barracks and granary, all on the cavalry post grounds; and the Council Lodge in the On-A-Slant Village.

The last home of the youngest general in American history, George Custer, is alive on Cavalry Square at Fort Abraham Lincoln.

After fire destroyed their first home at Fort Lincoln in February, 1874, Civil War hero Custer set about altering standard army design to rebuild the house to suit his wife Libbie's tastes. This, then, truly was the "Custer House." Over the same site as the burned house, a new one was quickly built with a large, 32-foot parlor with a bay window, a billiard room on the second floor, library, and plenty of rooms for his relatives, gun collection and hunting trophies. A sweeping veranda on the east and north completed the most impressive dwelling on Officer's Row.

Guided tours by uniformed soldiers or Custer's maids are conducted in a "living history" style, taking visitors on a time trip to 1875.

Coincidentally, a Mandan Indian village named On-a-Slant existed on the site for about 200 years. It was abandoned after a smallpox epidemic in 1781, when the Mandan moved north to the villages where Lewis and Clark found them two decades later. A thousand Mandan, or more, lived here comfortably in 85 round lodges of earth and wood. Remarkable farmers, the Mandan pioneered corn cultivation in the region, also growing beans, squash, sunflowers and tobacco in the fertile bottoms along the Missouri River. Mandan villages like On-a-Slant were centers of commerce for centuries, attracting goods through an inter-tribal trading network that stretched from the American Southwest and the Rocky Mountains to the forests of Canada.

A $1.9 million restoration of On-a-Slant was completed relatively recently. Four earthlodges are rebuilt and filled with exhibits on the Mandan and their culture.

Guided tours of the village help bring an understanding of the contributions of this powerful Native American culture.

The CCC-era fieldstone Fort Lincoln Visitors Center is a museum providing an overview of the major themes of Fort Lincoln's past: the Mandan, Lewis and Clark, the fur trade, the settlement era and the frontier military.

Guided horseback tours of old Fort Lincoln parallel the historic Custer Trail of 1876. Knowledgable wranglers lead rides daily from May to September. Sunset rides and horseback overnights can be arranged. Riders must be at least 7 years old and less than 250 lbs. Price is approximately $20 for a 70 minute ride. Call (701) 663-3013 for the latest details and for reservations.