We crossed the Brazos, turned northward on University Parks Drive, and entered the grounds for the museum. On rich carpets of grass sits Major George B. Erath's statue, and we snapped a picture of it before we went inside. Erath participated first in the company of Colonel Moore when he joined forces with Coleman's rangers at Parker's Fort, then he served in the battle of San Jacinto when Texas won her war for Independence, and after that he continued to serve Texas as a legislator and ranger. He was born in Vienna, Austria, but his colleagues donned him "The Flying Dutchman" after an Indian battle in Moore's ranger company, during which his young horse became so incensed by the battle cries that he rushed ahead of the others. When he was 73 years of age, blind, and in poor health, Erath dictated the details of these events to his daughter who recorded and compiled his memoirs. He was an honorably outspoken man, for he believed that the Mexican Army, under the command of the stubborn and unpredictable Santa Anna, deserved much more credit for their courage than they received. In one section of his memoirs, he recalls that while the rest of his battalion guzzled the crates of champagne, stacked into a pyramid and left behind by the Mexican army after their defeat at San Jacinto, "I took my carouse in eating sugar." Erath's colorful accent was one of his best known traits, and fellow Ranger Noah Smithwick quoted him as saying, to describe his own skills as a military commander, "I knows but vone vord of command, und dot ish, 'Sharge poys, Sharge!'" 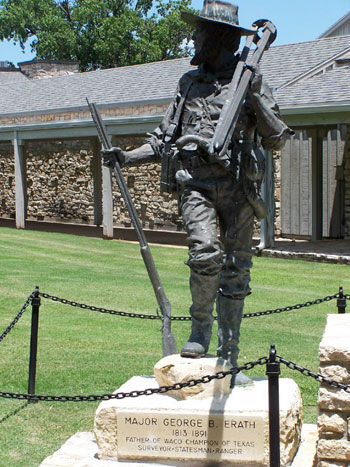