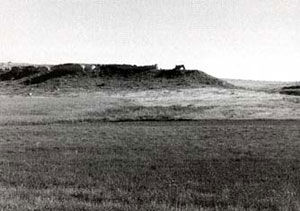 13 May 1869; Traer, Kansas: After leading an unsuccessful mission as the third prong of Gen. Sheridan's winter campaign into Indian territory, Maj. Eugene Carr and his 5th Cavalry marched back to Fort Wallace in Kansas. With Companies A, B, F, H, I, and L, he left the fort on 10 May, heading north to Fort McPherson on the Platte River. They reached Beaver Creek and headed downstream to Elephant Rock, near present-day Cedar Bluffs, Kansas. There they found an Indian trail going downriver.

Carr sent Lt. Edward W. Ward and ten men with scout William F. "Buffalo Bill" Cody to investigate. They followed the trail 12 miles until they topped a rise and found a Lakota village of perhaps 400 lodges. "This is no place for us, Lieutenant," Cody said to Ward. "I think we have important business at the camp to attend to as soon as possible."

Ward agreed, and they hightailed it back to Carr, but not before being seen by several Indian hunting parties. Cody, on the fastest horse, took off alone to deliver the news while Ward followed behind. At Cody's announcement Carr left one-third of each regiment with Capt. William H. Brown to pack up the camp and took the rest of his men downstream after the Indians. Ward, in the meantime, had skirmished with a hunting party, killing one warrior before Carr reached him.

Five miles farther, Carr ran into about 500 warriors, now fully aware that there were soldiers pursuing them. The warriors formed a line across Carr's path, but he went around the flank. Lt. Jules Schenofsky with Company B angled to the left and chased some warriors out of sight into the bluffs.

Carr reached the village as it was getting dark, so he turned around and went back toward maj. Brown and the wagons. Car's retreat emboldened the Indians, and they threatened him enough to make him march his men in a square. The company joined the wagons about 9 p.m. One other soldier had been killed and three wounded during the fighting.

The next morning Carr returned to the village, abandoned during the night, and destroyed what had been left behind. Schenofsky finally returned. He had chased Indians for sven miles, lost three men, and spent the night in the hills.

The encounter had cost Carr a total of 4 men killed and 3 wounded. He reported 25 Indians killed and 20 wounded.