Chesley S. Dobbs, one of the early settlers of Young County, moved to the southeastern part of Palo Pinto County, during the late '60s. June 26, 1872, Mr. Dobbs, who was County Commissioner, and Justice of the Peace, was in Palo Pinto on business. He had double pockets on his saddle, and W.J. Hale shod his horse before he left Palo Pinto. Frank McLaren said, "Dobbs, aren't you afraid to go so far alone?"

Mr. Dobbs, at the time, lived more than twenty miles southeast of Palo Pinto, in the Dobbs Valley Section. When asked this question, he replied, "There is danger of Indians we know, but I have traveled it many times. After reaching Pleasant Valley, somewhere west and north of Alex Moore's place, he was chased by several Indians. Dobbs, at the time, was mounted on a good horse, and circled around in the flats for two or three miles, before he was finally killed. This occurred Tuesday evening, June 26, 1872.

The following night, or the second night, Indians stole horses at Bill Fancher's place, near the present Oaks Crossing of the Brazos. They also stole some mules from Smith Lynn, and Uncle Johnny Eubanks and a horse from George Barber. The next morning a runner came to Palo Pinto, since Mineral Wells was, then, not in existence, and notified the citizens. At that time, however, it was not known that Chesley S. Dobbs failed to reach his residence.

Wess Veale, Johnnie Lynn, Geo. Lynn, Polk Berry-Hill, and Jim Denton, all from Palo Pinto, joined by Joe Stephens, and a son, Smith Lynn, Alex Fancher, and J.P. Metcalf, who lived on the river, followed the Indians' trail from the Geo. Barber place. The warriors went through the DeVaughan Bend, on up by the mouth of Turkey Creek; and about night, were located at the Old Painted Camp, a favorite Indian camping ground, near the mouth of Big Keechi. Since the Indians were unaware of the citizens' presence, the white men decided to withdraw and charge the next morning at the break of day.

When the citizens advanced and were slipping toward the Indians' camp, Geo. Lynn's emotions were too much for him; so he had to loudly scream, "Here they are, boys!" This, of course, alarmed the Indians, who fled for the river, which was then up so high it would swim a horse. It was not yet good light, but each time the citizens saw water splash, they fired.

Although the Indians escaped, the white men captured their camp equipment and recovered the stolen horses and mules. They also found somebody's clothes. About that time, one of the citizens picked up a white man's scalp, and Joe Lynn said, "If that isn't Chesley Dobbs' scalp, I am badly fooled." Mr. Dobbs, like others, wore long hair. The scalp was carried back toward town, and in a short time Clinton Dobbs, son of Chesley S. Dobbs, came along hunting his father. It was now Friday morning, and Mr. Dobbs left Palo Pinto Tuesday. So everybody felt sure he had been slain by these warriors.

W.P. Veale, Henry Veale, Thomas Wilson, father of Judge James C. Wilson, Buck Dillahunty, James Warren, from Palo Pinto, and W.D. Goens, Henry Bradford, James Dobbs, Thomas Gilbert, and Taylor Gilbert, from the southeastern part of the county, where Mr. Dobbs lived, numbered among those who searched for his body. W.P. Veale was the first man to find him, and when he did, fired his pistol. 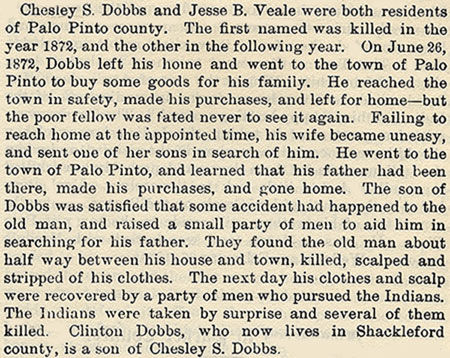