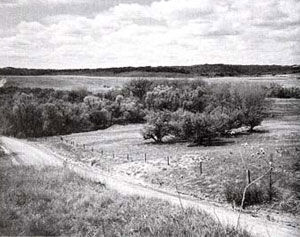 17 June 1865, Crawford, Nebraska: When Col. Thomas Moonlight, in command at Fort Laramie, heard by telegraph of Fouts's Fight, he quickly organized an expedition to catch the renegade Lakotas. Leaving at 8 a.m. on 15 June, Moonlight took 234 men of Companies L and M of the 2nd California Cavalry, Company L of the 11th Kansas Cavalry, Company L of the 11th Ohio Cavalry, and a detachment of the 16th Kansas Cavalry in a rapid march to Horse Creek. From there the men followed the Indian trail north to Dead man's Fork, a small creek flowing into the White River, about four miles southwest of present-day Crawford, Nebraska.

Moonlight had marched hard-120 miles in two days-and 100 of his men had to turn back when their mounts gave out. On the 17th, the command had gone 20 miles before breakfast, when they stopped for a rest by the stream's steep banks. Few of the California Cavalry had picket ropes or pins, so their horses were herded. The Lakotas, camped on Soldier Creek on the other side of the White River, saw the soldier's camp and recognized an opportunity.

At 10 a.m., about 200 warriors charged in and stampeded the horses. The troopers tried to corral the animals, but the shooting and war whoops made them frantic. Moonlight and Capt. Joel Huntoon placed themselves in front of the stampede but failed to stanch it. The horses ran to the mouth of Dead Man's Fork, where waiting warriors gathered them up and headed over the mountains. As Capts. James A. Brown, George D. Conrad, and Henry Booth and about 25 troopers pursued the raiders, nearly 400 warriors confronted them, some taunting the troops in English. The soldiers prudently gave up the chase.

Moonlight later wrote, "After losing the horses there was nothing left for me to do but to return, after destroying the saddles and other property which we had no means of transporting." The colonel ascribed no blame for the loss of his horses, but he did complain that he was provided with no hobbles, which he thought was the only way to secure the animals properly in hostile territory. "Nor will I ever attempt again to march a command, large or small, unless provided in this way." Moonlight never had to worry about it again, however, for when his "foot soldiers" returned to Fort Laramie, the colonel was relieved of command.

Two soldiers were wounded and 74 horses were captured. Moonlight claimed to have seen 4 Indians shot dead off their horses, and several more wounded.