November 7, 1870, Hen. Belding, met Marcus L. Dalton in Weatherford. Mr. Dalton, at the time, was returning from Kansas, where he had moved a large herd of cattle. He had also made several previous trips over the trail. Uncle Henry Beldings, at the time, lived on the Belding Ranch, about thirteen miles west of Palo Pinto, and Mr. Dalton lived on the Brazos, in the Sand Valley section.

When Mr. Dalton was asked by Uncle Henry Belding to accompany him home, he replied that he had been away a long time, was exceedingly anxious to get home, and wanted to take a direct route from Weatherford to his residence up the river. Consequently, on the morning of November 8, 1870, Mr. Dalton, traveling in a wagon drawn by a span of mules, left the residence of his son-in-law, Dr. J.P. Valentine, who lived in Weatherford, and was accompanied by James Redfield, and James McAster, who were making their first trip to the frontier. Mr. Dalton had his six-shooter in the wagon seat, and supplies and provisions in the rear. A faithful little dog that had followed him to Kansas, was also along. In the upper tray of his traveling trunk, this noted frontiersman had over $11,000.00 concealed in a shoe. Since Mr. Dalton knew the road, he led the way, and was followed by a wagon driven by one of his hands. The third man, on horseback, driving some ponies, followed in the rear.

Marcus L. Dalton, James Redfield, and James McAster were traveling along the old Weatherford-Belknap road, and when they reached a point in Loving's Valley, about three-fourths of a mile east and north of the present town of Salesville, they were ambushed, and slain by the same Indians, mentioned in the preceding section. The Indians ambushed Mr. Dalton and associates about two hours after they encountered the Jowell brothers, Locke, and Foster. No doubt, Mr. Dalton was killed instantly, for his pistol had never been moved from its scabbard. His mules, however, ran with the wagon out to the right side of the road, made a circle of perhaps 150 yards, then crossed the roadway to the left. Redfield and McAster were each lying on the ground near the second wagon. All three were scalped, and their bodies badly disfigured. Since Mr. Dalton's trunk seemed to be locked, the Indians cut a hole in its side and removed such articles that were found near the bottom. Apparently, however, the savages did not know the trunk had a tray; so they did not find the eleven thousand dollars hidden in a shoe. This money, in due time, was safely placed in the hands of Mr. Dalton's family. The mules and a part of his horses, which were carried away by the Indians, were later found about three miles north.

Late in the afternoon of the next day, Mr. Dalton and associates were found by Marion, Green, and George Lasater, and Wm. Evans, who were horseback and returning to their homes in the Keechi Community. Only the sadly dejected little dog of Mr. Dalton, which lay near the bodies of Redfield and McAster, was left to relate the fate of the three worthy citizens. Two of the four that found him, remained and the others hurried with the news to Old Black Springs. Sam Ham was one of the messengers who went from Black Springs to notify Mrs. Dalton and her children who lived upon the river in the northwestern part of Palo Pinto County. John, who then lived at Palo Pinto, was the first member of Mr. Dalton's family to arrive. The three were found late in the evening.

An account of this raid in Smythe's Historical Sketches of Parker County, printed in 1877, states that Mr. Dalton was murdered December 16, and an account of the killed related by a son, places the date at November 4, but Mr. Dalton's tombstone, in the graveyard at Weatherford, bears the following inscription, "Marcus L. Dalton, born Oct. 14, 1819, Murdered by Indians November 18, 1870."

Note: Before writing this and the preceding section, author interviewed the following: James C. Jowell, mentioned above; C.A., G.L. and R.S. Dalton, sons of Marcus L. Dalton; A.M. Lasater, a brother of Marion, Green and George Lasater, who in company with Wm. Evans, were the first to find Mr. Dalton and his associates; James Wood; Mrs. H.G. Taylor; Jane Bevers; Mrs. Jerry Hart; and many other early settlers, who lived in Palo Pinto County at the time. 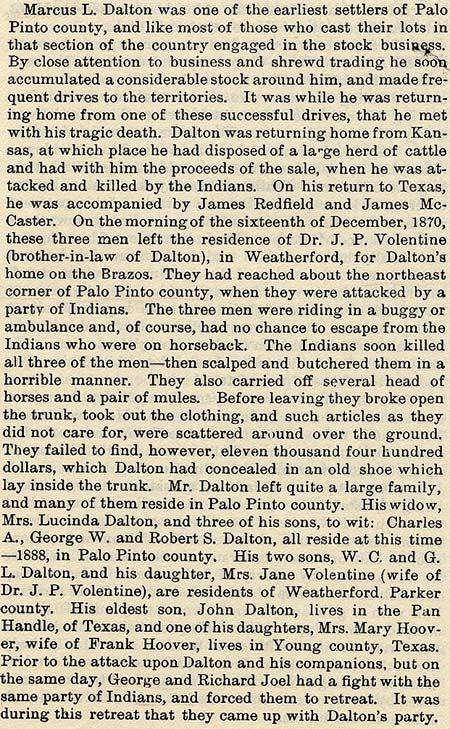 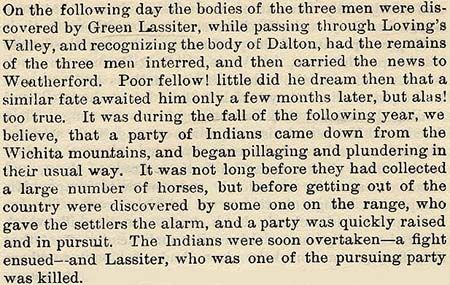