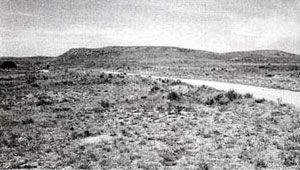 After the Cheyennes and Lakotas chased the soldiers at Platte Bridge Station back into the post, they were distracted from pursuing the fight by word of a wagon train approaching from the west. Sgt. Amos J. Custard of Company H, 11th Kansas Cavalry, was in charge of the 14 teams, 5 wagons, and about 25 men of Companies H and D. Custard left Sweetwater Station on 25 July and camped for the night at Willow Springs, halfway to Platte Bridge. That evening Lt. Henry C. Bretney and Capt. A. Smith Lybe with their detachments also on their way to Platte Bridge, stopped at Custard's camp and suggested he join them, but the sergeant thought the mules were too tired.

The next morning Custard took his train down the telegraph road near the North Platte River. Past Red Buttes, he met a 30-man patrol of the 11th Ohio Cavalry, who warned him that thousands of Indians were besieging the station just ahead and urged him to turn back. "No sir," said Custard, "we don't stop here. We are going to Platte Bridge in spite of all the Native tribespeople this side of hell."

Farther on, Custard heard the gunfire and sent five men to scout ahead. The scouts were soon attacked and dashed to the river for safety. Two of them were shot at the river, but three others eventually made it to the station. On the way they killed the Cheyenne Left Hand, brother of the famous war leader Roman Nose.

Shortly after the scouts left, the Indians swarmed on Custard. He hurriedly corralled his wagons, and the remaining 20 men fired from beneath or inside the wagons. The warriors got in close, some rolling logs and rocks in for cover as they tightened the circle. Though hopelessly outnumbered, Custard and his men held out for four hours. When Roman Nose finally directed the warriors to rush in for the final combat, there were only a handful of soldiers still alive. The few they captured were subjected to horrible tortures, for the soldiers had shot a substantial number of Indians. The Cheyennes threw away the scalps they took, for too many warriors had died to celebrate the battle.

Killed were Custard, 19 soldiers at the wagons, and the 2 shot at the river. The Cheyennes lost 6 warriors, with another 6 wounded. The Lakotas lost about 6 killed and 12 wounded.