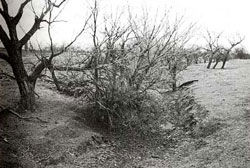 Crooked Creek
From the book, Encyclopedia of Indian Wars, by Gregory F. Michno.

The following story is from the book, Tribal Wars of the Southern Plains, by Stan Hoig; Copyright © 1993 by the University of Oklahoma Press. Reprinted by permission. All rights reserved.

On April 30, Van Dorn led six companies of Second Cavalry out of Radziminski on a march to the north, making his way up Elk Creek to the Washita and Canadian rivers through what are now Kiowa, Beckham, and Roger Mills counties. The Indian scouts rode as far as ten miles in advance and as flankers. On the fourth day in the field, one of the scouts captured a Comanche boy. Under threat of death, the boy was forced to lead the cavalry command to his village.

The Canadian River was in flood stage when the troops crossed it thirty miles downstream from the Antelope Hills. Parking his wagon train under guard, Van Dorn continued ahead with pack mules across present Woodward and Harper counties without encountering the Indians he sought. The Kansas border was crossed at its intersection with the Cimarron River, and soon after a small band of Indian buffalo hunters was spotted. A running fight ensued, with one Indian, a Comanche, being killed. Now large, recently abandoned campsites were seen regularly.

Swinging to the northwest across present Clark County, Kansas, Van Dorn followed a fresh trail made by a small band of Indians. During a noontime halt, three Indians were discovered as they crept up on the Second Cavalry horse herd. While giving chase to the Indians, Lt. William B. Loyall discovered and captured a large herd of horses not far from a Comanche village. When Van Dorn was notified of this, he immediately ordered his troops back into their saddles and attacked the camp.

Again deprived of their principal fighting implement, their horses, the defiant Comanches took up positions among the bushes and trees of Crooked Creek and poured a barrage of arrows and gunfire from their concealment. Van Dorn positioned two mounted troops on each side of the river, dismounted two more, and formed a line that swept down through the river valley.

The disadvantaged Comanches were routed, forty-nine of them being killed and thirty-six taken prisoner. One trooper was lost, and Lieutenant Lee suffered an arrow driven through his chest and right lung and protruding from his back. Captain Smith received a bullet wound in the thigh. Both would recover, soon to take up arms for the Confederacy. These Comanches were thought to be part of Buffalo Hump's band, the same group that Van Dorn had mauled at the Wichita village.