Marker Title: Authon Cemetery
Address: On Garner-Adell Rd, off US 180, about 20 mi. W of Weatherford.
City: Authon
Year Marker Erected: 1981
Marker Location: From Weatherford, take US 180 west about 10.5 miles, turn onto FM 113 about 5.5 miles, turn east onto Authon-Bethesda Road, (Old Authon Road), continue about 2 miles. Turn south onto Garner-Adell Road, about .25 mile to cemetery.
Marker Text: Named for the nearby Authon Community, located on the Fort Worth-Fort Belknap Military Road, this site first served as a cemetery for the family of Kentucky native Isom Cranfill (1831-1902). The earliest burial here was that of his 15-year-old son, Linn Boyd Cranfill (d. 1871), who was killed in an Indian attack near the family home (.75 mile south). The cemetery and adjoining land were later deeded to the Authon Church of Christ, who worshiped in a sanctuary at this site until the 1920s. Still in use, the public burial ground contains the graves of many pioneer area settlers. (1981)

During 1871, Lynn B. Cranfill, a son of Isom Cranfill, who lived about twelve miles northwest of Weatherford, went out a few hundred yards from the house to lead his pony to water. It was about noon, and he was afoot. When this frontier boy failed to return, somebody went out to ascertain what had happened. Young Cranfill, who was fourteen or fifteen years of age, was found scalped near a tank of water.

In the following pages from J.W. Wilbarger's book, Indian Depredations in Texas, the story is slightly different. The Indians hurried away without scalping their victim. 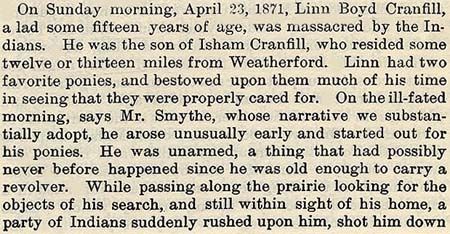