Cow Creek Crossing -- The Cow Creek crossing is 4 miles west of Lyons on US Highway 56, 1 mile south, and then west to a bridge over Cow Creek. The actual crossing was just south of the present bridge. Cow Creek was an important campground and crossing where a trading ranch and stage station developed in 1858. The ranch and stage station were built east of the crossing by Asahel and Abijah Beach in 1858. A well was dug at approximately the same time to provide water for livestock and for travelers on the Santa Fe Trail. A toll bridge was built over Cow Creek in 1859. The present bridge is believed to be below the site of the original, which was reportedly just north of the old crossing of Cow Creek. Looking south from the west end of the present bridge, stones for crossing the streambed were identified during the drought of 1988. 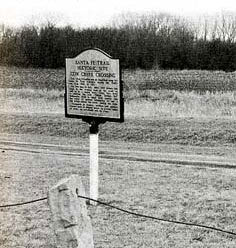 11 June 1865: (Alden, Kansas) Lt. Richard W. Jenkins, Company I, 2nd Colorado Cavalry, along with three men of his company and three men of Company G, 7th Iowa Cavalry, left Cow Creek Station on 11 June to accompany the mail coach to Fort Zarah. Three miles from the station, the soldiers passed a slow-moving wagon train, and one mile beyond that, they were stormed by 100 Indians, probably Kiowas. As the mail coach spun around, with Jenkins and his men blasting away, the raiders rode up to the windows, stabbing at the guards inside with their lances.

Watching the scene from the roof of Cow Creek Station, Capt. Elisha Hammer, Company G, 7th Iowa Cavalry, quickly readied 29 men of his own company and 26 men of Company I, 2nd Colorado Cavalry, and rushed to Jenkins's relief. At Hammer's approach, the Indians pulled back. Jenkins took command of the Company I contingent and joined with Hammer to chase the Indians. They rode about six miles southwest to the Arkansas River, where they caught the warriors fording to the south bank. The Indians were, Hammer said, "close enough to empty eight saddles"

Jenkins crossed over with his men to pursue the Indians, then Hammer crossed with his. They continued the chase three miles farther south, but the Indians had gotten too far ahead, and Hammer called it off.