During 1871, about sixteen Indians approached the home of Nick Coalson, who lived on Copperas Creek, about fifteen miles west and north of Junction. Nick Coalson and Charlie Mann were away hunting and Frank Harris gardening a considerable distance from his residence. Frank Harris, his wife and one year old baby were then living with Mr. and Mrs. Coalson and children. Harris discovered the Indians and started toward the house but was murdered near the door by savages, who had been killing cows and other domestic animals for amusement. When Mrs. Harris saw her husband fall, she screamed. But Mrs. Coalson, who had a shotgun in her hand, demanded that Mrs. Harris be quiet inasmuch as the Indians would attempt to kill and capture all present.

It seems the screaming of Mrs. Harris caused the savages to think the opportune time had come to finish their work of slaughter. But the first Indian that appeared at the door was filled with buckshot by Mrs. Coalson. The remaining savages retreated for some distance and were not so bloodthirsty after all. Billy and Doug Coalson, who were then ten and twelve years of age, were also armed and shot through the cracks of the little picket house when an opportunity presented itself.

Nick Coalson and Charlie Mann, then about two miles away, heard the firing and hurried toward the house. Evidently the savages must have been informed of their coming by an Indian spy, for when the two men reached the vicinity of their residence, the Indians retreated. 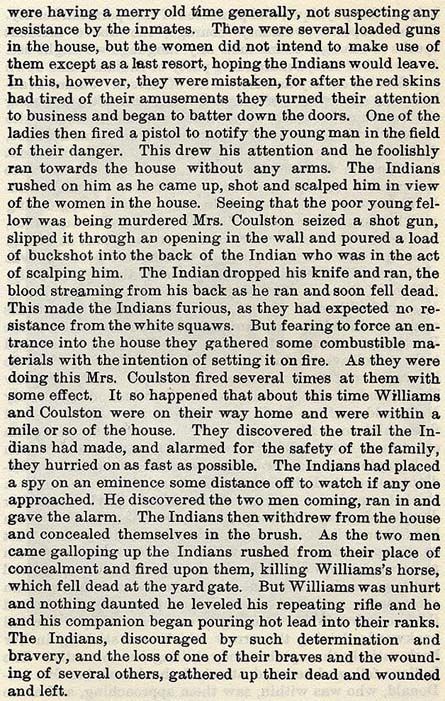