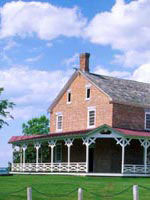 At different times in the past, both Native Americans and French colonists settled along the shore of Lake Champlain at Chimney Point. Today, the exhibits and programs at the Chimney Point Museum explore this part of Vermont’s ethnic heritage from the prehistoric evidence to the contemporary issues and traditions kept alive by both peoples.

Beginning nearly 7,500 years ago, Native Americans regularly camped at Chimney Point where they hunted and fished the surrounding areas. Their campsites reveal a way of life closely linked to nature and one that adapted to the gradually changing landscape. This area later became an important route for regional trading during the Woodland culture (1000 BC—AD 1600). Worked copper, shell, stone and other materials, originally from distant locations, have been found here. Eventually the Woodland people, the ancestors to today’s Abenaki or “people of the Dawnland,” began farming this valley to supplement their hunting, gathering, and fishing activities. European interests in the New World soon brought more dramatic and rapid changes to native culture. In order to survive, many Abenaki tried to hide their heritage; others left the area.

Although the French first visited this area in 1609 during Samuel de Champlain’s explorations, it was not until 1731 that they began establishing a settlement at Chimney Point. A small force of French soldiers built a temporary wooden stockade, Fort de Pieux, on this point of land. The small fort protected French interests in the valley until a permanent fort, St. Frederic, was built across the lake at present-day Crown Point. The government of New France encouraged settlement in the area and by 1743 the settlement of Hocquart was established here. At the close of the French and Indian War (Seven Years War) the British drove the French north into Canada. Virtually all that remained of their houses and buildings on this point of land were chimneys; thus, the site became known as Chimney Point.

The Chimney Point building has a story of its own that is also interpreted in the site’s exhibits. Part of the original house dates back to the late 1780s/early 1790s. In the “period taproom,” long the subject of local Ethan Allen folklore, fact is weeded from fiction. Other exhibits examine the late 19th and 20th century history of the building and the Barnes family, who owned the house from about 1822 until it was purchased by the State of Vermont, Division for Historic Preservation in 1969.

How to Get There

From Northern and Eastern Vermont — take Route 7 south to Route 22A, then proceed on to Route 17 west and take the left turn immediately before the Lake Champlain Bridge.

From Southern Vermont — take Route 30 or Route 22A north to Route 125 west, then take the left turn immediately before the Lake Champlain Bridge.

From New York State — cross the Lake Champlain Bridge, 4 miles east of Route 9N and 22, and take the first right turn immediately after crossing the bridge.