About noon, while the boys were traveling along north of the old Newberry Place, and about three miles northeast of the present town of Millsap, several Indians came up and killed Martin Cathey and his nephew, Johnnie Hale. The wagon was covered with a sheet, for the weather was extremely warm. And since Johnnie Hale had said he was going to sleep, some have surmised the Indians slipped up and shot Johnnie from the rear end of the wagon before they hardly realized the Indians were around. Johnnie Hale was scalped, and Martin Cathey, who was driving, apparently was left uninjured. Since others were traveling along the road, it has been supposed their presence frightened the Indians and caused them to leave before Martin Cathey was scalped. Just exactly what happened of course, no one knows, for no eye witnesses were present at the time. But at least one person still lives at Palo Pinto who lived there then, and who has heard and thinks that Martin Cathey, who was not scalped, and who was not mortally wounded, was actually frightened to death when the Indians appeared. These things, of course, are more or less suppositions. Nevertheless, two horsemen came along and found the boys a few moments after they had been murdered. Their team had been hurriedly cut from the wagon, and the harness found about one year later, hanging in the brush a short distance away.

At the time, Judge Wm. Veale, and his son, Milton, both of Palo Pinto, were on their way to Weatherford, and were traveling in a buggy. They had stopped near the old Fuller-Millsap Place, on Rock Creek, to eat their lunch; and had been here only a short time, when the two horsemen, who found the boys, came dashing up and related the news. Wm. Veale and his son, as well as the two horsemen, hurried over there, for they felt sure it were Johnnie Hale and Martin Cathey that had been killed. These boys were ex-students of Judge Wm. Veale, who had been their teacher only a short time before. Their bodies were carried back to the Brazos, where Jessie Hale, father of Johnnie Hale, lived. They were then carried to Palo Pinto, and until ready for burial, placed in the old Dr. S.S. Taylor's house, now owned by Mrs. Ed Marshall, Sr., Johnnie Hale and Martin Cathey were buried in the lower graveyard.

The following is from the book, A Cry Unheard, by Doyle Marshall:

When the Veale party and the two riders reached the site of the ruthless killing north of the old Newberry home, which was about two or three miles east of the town of Millsap, the scene "froze their blood with horror." There in the road lay the scalped, but still warm bodies of John Hale and Martin Cathey. The Indians had cut the harness to pieces, ripped open the bags of grain to be ground, and left with the horses. It appeared that Hale and Cathey had put up a good defense.

The pleasant journey of William Veale and his sons and nephew turned into a funeral cortege as the gloomy party loaded the bodies of the youth onto the Veale wagon and returned them to the Brazos River home of Jessie Hale, father of John Hale. The bodies were removed to Palo Pinto for the funeral and burial.

Fannie Veale, a Palo Pinto youngster at the time who many years later wrote of the tragic affair, could never forget the emotional experience of seeing the many mourning settlers from far and near gathered to pay their last respects to the two young men whose lives were suddenly taken at such an early age. Since there were no undertakers nor ready-made coffins, and because the bodies were in such bad condition and the weather was hot, quick burial the next day was necessary. The bodies were wrapped in white sheets and laid out on a platform in front of the schoolhouse, in the shade of a grove of trees. Women took turns waving tree branches over the bodies to keep away the flies until they were lowered into the graves behind the schoolhouse. Burned indelibly into the memory of Fannie Veale were the burial service preached by the noted cattle rancher and frontier missionary, George Webb Slaughter, and the heartrending wailing of the grief-stricken families of Hale and Cathey. Fannie hid her face in her mother's skirt to escape the trauma of it all. In spite of the emotional shock and fright of the entire Palo Pinto community resulting from the Hale-Cathey killings, the carefree Palo Pinto youngsters soon put from their minds the continued threat of Indian attacks and had to be warned constantly by their parents to look out for Indians.

The following story is from the book, Indian Depredations in Texas, by J.W. Wilbarger. 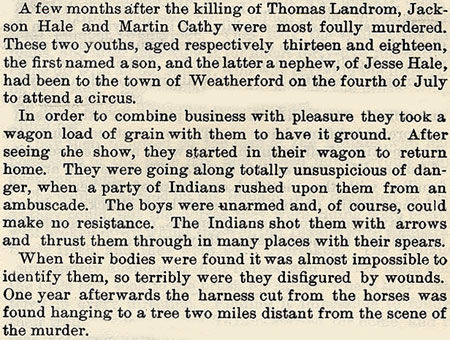