Marker Title: Sloan-Journey Expedition of 1838
Address: Mosier Valley Rd. & FM 157
City: Arlington
Year Marker Erected: 1984
Marker Location: Mosier Valley Rd. at intersection of Mosier Valley & FM 157, Arlington.
Marker Text: In the spring of 1838, Captains Robert Sloan and Nathaniel T. Journey led a group of about 90 northeast Texas frontiersmen on a punitive expedition against the Indians who had raided their homes in present-day Fannin County. The trail led them to the vicinity of present-day Euless and Arlington, where they attacked a small Indian village, killed several Indians, and recovered a few horses. The Sloan-Journey expedition is among the first known Anglo-American activities in what is now Tarrant County that helped to open north Texas to white settlement.

From the book, Indian Depredations in Texas, by J.W. Wilbarger:

The following accounts of murders and massacres in Fannin county were written a few years ago, by the late Judge J.P. Simpson (an old pioneer of Fannin county), for publication in a little book entitled, "History of Fannin county," by W.A. Carter. Having been written by one who was personally familiar with the different incidents related, and whose reputation for veracity was so well recognized by those who knew him, we have no hesitancy in giving them to the reader with no other endorsement, and feel perfectly safe in saying that they will all be found substantially correct.

In 1838, the first volunteer companies for the defense of Fannin county were raised and organized by Captain Robert Sloan and N.L. Journey. These two companies consisted of forty men each. Captain Journey's company met at Jonathan Anthony's, eight miles south of Fort English, all in high glee under the influence of strong drink. That night the Captain's charger and two others were stolen by the Indians. Next day was spent in getting other horses to supply the vacancies; and that night two companies met at what was then called Linsey's Springs, on Bois d' Arc, where Mr. Sears now lives. Beef was slaughtered for rations and everything made ready for an early start for the Indian village on the west forks of Trinity. Guards were stationed around the encampment for the night, and each went to spinning yarns. In the midst of all this amusement one of the guards fired his gun, in an instant the pickets fled for camp, men ran for their guns; some guns were misplaced, shot pouches and ammunition missing, all hurry and confusion; the captain dispatched to ascertain the cause of alarm; no guard at his post; one of the guards (my mess fellow) dashed into camp, saying he had seen and shot at an Indian trying to steal horses; his heart beating so hard he declared it was the sound of Indians' feet fleeing from the fire of his gun. The officer returned, made his report to headquarters, stated that he found no dead or wounded Indian; he supposed he had found an Indian's blanket, but on examination found he was mistaken; the blanket turned out to be the paunch of the beef slaughtered for rations for the men; no more yarns that night.

Next morning we mounted our horses and started for the Indian village, our pilot in front. Marched three days and camped for the last night until the Indian village would be desolated by the heroes of Fannin. An alarm by the pickets during the night, but no one killed or wounded. Next morning a council of war was held, scouts were sent ahead to spy out the village. The scouts returned and reported the village near at hand. Now we must try our bravery or run-three hundNative American warriors fortified in their huts. To defend themselves, female tribespeople and children, and only ninety whites to attack and enter into deadly conflict with them. Columns of attack were formed and the charge ordered. Many a pale face was to be seen in the ranks. Away we went, but lo! When we got to the scene of action, only a camp of Indians was there. The Indians were soon dispatched by the men and the scalps taken from their heads by Captain John Hart. One white man was wounded and one horse was killed. There we found Captain Journey's stolen horse and others. After the battle one wounded Indian lay concealed in the grass with a tomahawk in his hand. A man by the name of Pangborn (usually called "Brandy," from the quantity of that article he drank) was on the lookout for the wounded Indian and came up on him so close he couldn't shoot. The Indian rose with tomahawk in hand, striking at Pangborn's head. The latter wheeled and ran, shouting for help at every jump. One gun was fired from our ranks, the Indian fell, and Captain Hart was on him in an instant and took his scalp. The place some years since was occupied and settled by Major Bird, and called Bird's Fort, not far from where Fort Worth now stands. We started for home, and the third night camped on Bois d' Arc near where Orangeville now stands, and found that Indians had been in the settlement and killed and scalped one of our best citizens, William Washburn. Thus ended our first scout for Indians in Fannin, until a more formidable force could be raised to protect the frontier, which was done that winter under the command of General John H. Dyer, of Red River county.

"I came to Texas over half a century ago, and am now an old man, the only survivor of three brothers who served Texas in her early struggles. Josiah Wilbarger, who was scalped by the Indians a few miles east of where the capitol of Texas now is, was my brother. He survived, as this book relates, the massacre of his companions, but afterwards died from a disease of the skull caused by injuries. Having spent the prime of my life among the pioneers of Texas, and therefore knowing personally about many of the fights and massacres described in this volume, the idea occurred to me many years ago that when the early settlers were all dead their posterity would only know from tradition the perils and hardships encountered in the early settlement of Texas. When I found that no one else seemed inclined to preserve in history the story of massacres and conflicts with Indians, I undertook the work myself. During some twenty years I have carefully obtained from the lips of those who knew most of the facts stated in this volume. For their general correctness I can vouch, for I knew personally most of the early settlers of Texas, and have relied on those only whom I believed to be trustworthy.

An Indian village was sited on September 18, 1838 by a company of Rangers led by Colonel Daniel Montague, not long after they had split off from a second scouting company under captains Sloan and Journey. 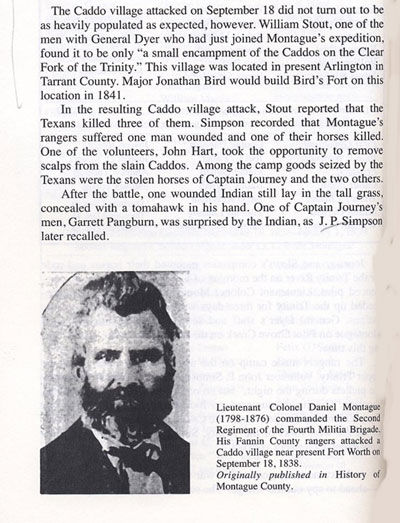 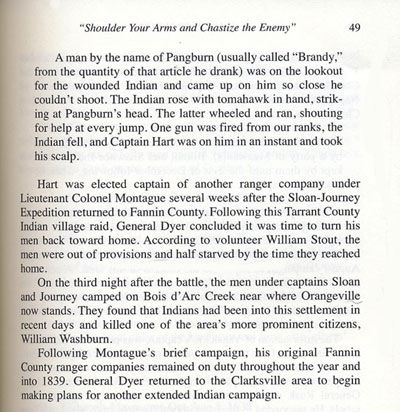