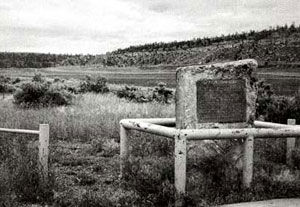 Picture of the Canyon Creek Fight Site from the book,
Encyclopedia of Indian Wars, by Gregory F. Michno.

Colonel Samuel Sturgis, now commanding the 7th Cavalry, moved forth with six companies of the regiment, augmented by elements of three companies of the 1st Cavalry. Sturgis's plan was to intercept the Nez Perce as they made a southerly turn before reaching the Yellowstone River. This was a mere deception, but Sturgis bought it and lost the Nez Perce. He soon found himself facing Major Sanford and Howard's vanguard.

Having deceived Sturgis, Joseph raided some settlements along the Yellowstone River near the site of present-day Laurel, Montana, and proceeded to cross the river. Having made a U-turn, Sturgis also forded the river, hoping to cut Joseph off as the Nez Perce moved up Canyon Creek, out of the river valley and onto the plateau beyond. Again, as at the Big Hole and at Camas Meadow, the skill and discipline of the Nez Perce warriors proved too much for the U.S. Army. Their marksmanship and horsemanship proved superior to the 7th Cavalry, as the outmaneuvered Sturgis repeatedly.

The Battle of Canyon Creek on September 13, 1877, was not nearly the kind of defeat that the 7th Cavalry had suffered just eighty miles to the east on June 25 the previous year, but it was hardly the sort of showing that Sturgis might have liked. He lost just three troopers killed in action and eleven wounded, but he had failed to stop a slightly smaller force that was encumbered with large numbers of women and children.