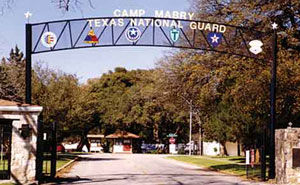 A photo I.D. is required for entry onto Camp Mabry.

Includes the Museum and the Thomas S. Bishop All Faiths Chapel. Contact the Department Historian for information and to schedule, (512) 782-5659 for tours or visits.

The Library and Archives is under continuous development and is available for in-house research by appointment only. Call (512) 782-5911 for information.

Join us in preserving the history of our state military forces by becoming a member of our museum. We depend upon donations and our volunteers to operate. We charge no admission fee and welcome group tours, especially students. Presently, we are open to the public five days a week, but with additional volunteers we hope to expand our hours.

Sponsorships may be accepted
Corporate Annual Membership may also be available

Camp Mabry, named after Brigadier General Woodford H. Mabry, the Adjutant General of Texas from January 23, 1891 to May 4, 1898, is the headquarters of the Texas Military Forces. The original 90 acres, located on an elevated plain, overlooking the Colorado River about three miles northwest of the Capitol Building in Austin, was selected and donated by a committee of prominent citizens, businessmen and Guardsmen. It was accepted by Governor James S. Hogg on behalf of the state in 1892.

The same citizen’s committee raised and spent $25,000 for improvements, including a mess shed and an attractive grandstand. The Adjutant General’s Department had the prerogative of naming the camp and the choice was given to the 59 companies of the State Militia. Fifty one out of 59 voted to name it Camp Mabry in honor of General Mabry.

Through the years Camp Mabry expanded by various means and new construction on the site continued. The committee obtained permission from the legislature to charge admission to the public for activities held at the camp grounds. The Militia held annual encampments on the post and by 1911 Camp Mabry had expanded to more than 385 acres. The citizens of Austin donated 80 acres. Ninety acres were purchased from the proceeds of sham battles, horse races and polo games that were conducted on the post. Two hundred acres were purchased with federal funds. In 1915, the first building, an arsenal, was completed by the state for the National Guard. Immediately after its completion, all military equipment and weapons that had been in the state capitol building were moved to the arsenal. The building (41) stands on the east side of the post.

With the onset of World War I, the Texas National Guard, along with the Oklahoma National Guard, formed the 36th Infantry Division. The Division was mobilized for the war and Camp Mabry was used by the Army as a school for auto mechanics.

In November, 1940, the 36th Division and the 56th Cavalry Brigade were mobilized for a year, the 36th going to Camp Bowie at Brownwood and the 56th going to Fort Bliss in El Paso. The 111th Quartermaster Regiment, part of the 36th, mustered at the parade ground at Camp Mabry prior to going to Camp Bowie. When World War II erupted, Camp Mabry continued in existence as the Headquarters of the Texas Defense Guard, the only remaining State Militia. When the war ended, Camp Mabry was again the Headquarters for the State Military Forces. It was the focal point for the reorganization of the Texas National Guard, as well as the Texas State Guard. Additionally, the Adjutant General’s Office moved from the state capitol building to Camp Mabry during this period.

The post observed its 100th anniversary in 1992. It has the distinction of being the third oldest active military installation in the state, behind Fort Sam Houston in San Antonio and Fort Bliss in El Paso. In the past, Camp Mabry has been the home for the Department of Public Safety training schools, the host for many visiting military dignitaries, served as a recreation ground for the citizens of Austin and served as a school for auto mechanics. It has heard the beat of the cavalry horse’s hooves, the tramp of the infantryman’s feet and the sharp crack of rifle fire. The roar of aircraft engines and the beat of helicopter blades resounded over the post when it was home for the aviation assets of the Army Guard. The shouts of airborne troopers in training echoed through the hills on the western edge of the post, bringing back memories of the 36th Airborne Brigade’s basic airborne school conducted during the early 1970’s. A totem pole was dedicated by the Royal Canadian Air Force in honor of all Texans who served in the RCAF during World War II. Camp Mabry is the current repository of all the regimental colors of bygone days.

Currently, the post houses the 136th Regional Training Institute located in the Texas National Guard Academy building. The educational facility conducts the Officer Candidate School, the Non-Commissioned Officer Courses and numerous other specialized schools. Also located on the post is the United States Property and Fiscal Office, one of two state Combined Support Maintenance Shops, the, the armory of the Headquarters of the 36th Infantry Division, a troop medical clinic, a parachute packing and storehouse facility and numerous supply and warehouse facilities.

The Adjutant General’s Office, Headquarters of the Texas Joint Military Forces and 49th Troop Command are located in Building 8 and nearby is the Lieutenant General Thomas S. Bishop All Faiths Chapel. The chapel is unique, because it was built solely by members of the State Military Forces. Also located on the post is the headquarters of the Texas Air National Guard and Texas State Guard. The Texas Military Forces Museum is located across the street from the chapel in Building 6. Building 6 is a historic building, having been built in 1918 as a mess hall, complete with a bakery and kitchen facilities.