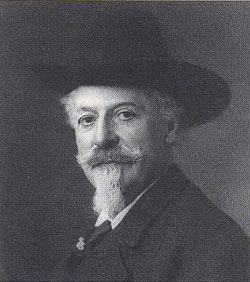 Cody was appointed chief of scouts for the 5th Cavalry around 1868, and he campaigned actively in Kansas, Nebraska, and Colorado for the next four years. In addition to scouting duties, he assisted commissary officers with hunting trips, and he made long, dangerous journeys as a dispatch carrier. Blessed with tremendous physical stamina, Cody was so skilled at eluding Indians that he rarely encountered adventure on his solitary treks. On one memorable campaign, Cody reunited with Wild Bill Hickok in an army camp in the Texas panhandle. The two scouts procured a wagonload of beer from a party of Mexicans and delighted the men with a classic beer bust. 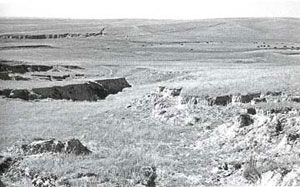 Among his skirmishes with Native Americans, Cody's most famous exploit occurred during the Republican River expedition. The expedition involved a battalion of the 5th Cavalry in pursuit of Chief Tall Bull's band of Cheyenne Dog Soldiers. The battalion's specific objective was to rescue Mrs. Susanna Alderdice and Mrs. Maria Weichell, who recently had been captured in a Kansas raid. Cody guided the column to Tall Bull's camp of 84 lodges in northeastern Colorado on July 11, 1869. When the troopers charged, Mrs. Alderdice was killed with a tomahawk, but a wounded Mrs. Weichell broke free and was rescued. 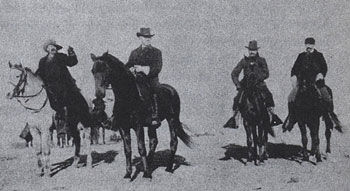 The Dog Soldiers were routed, and Tall Bull was slain. Members of the 5th Cavalry insisted that it was Cody who killed the Chcyenne leader, shooting him out of the saddle at 30 yards. Tall Bull's horse bolted ahead, but soldiers retrieved it and presented the animal to their scout. Cody christened his new mount Tall Bull, and he later won many a race with the steed.

Cody killed another Cheyenne chief, Yellow Hair (often translated incorrectly as Yellow Hand), during a clash in Nebraska on July 17, 1876. During a battle between the 5th Cavalry and the Comanche, Cody and Yellow Hair fired simultaneously at close range. Yellow Hair missed, but Cody's shot tore through the warrior's leg and killed his mount. At that instant, the scout's pony tumbled to the ground. Cody rose to a kneeling position as the brave fired wildly. Cody responded by shooting Yellow Hair in the head, killing him on the spot.

Cody wrote in his autobiography:

The two messengers were not over four hundred yards away from us and the Indians were only about two hundred yards behind them. We instantly dashed over the bluffs, and advanced on a gallop towards the Indians. A running fight lasted several minutes, during which we drove the enemy some little distance and killed three of their number. The rest of them rode off towards the main body, which had come into plain sight, and halted, upon seeing the skirmish that was going on. We were about half a mile from General Merritt, and another lively skirmish took place. One of the Indians, who was handsomely decorated with all the ornaments usually worn by a war chief when engaged in a fight, sang out to me, in his own tongue:

"I know you, Pa-he-haska; if you want to fight, come ahead and fight me."

The chief was riding his horse back and forth in front of his men, as if to banter me, and I concluded to accept the challenge. I galloped towards him for fifty yards and he advanced towards me about the same distance, both of us riding at full speed, and then, when we were about thirty yards apart, I raised my rifle and fired; his horse fell to the ground, having been killed by my bullet.

Almost at the same instant my own horse went down, he having stepped into a hole. The fall did not hurt me much, and I instantly sprang to my feet. The Indian had also recovered himself, and we were now both on foot, and not more than twenty paces apart. We fired at each other simultaneously. My usual luck did not desert me on this occasion, for his bullet missed me, while mine struck him in the breast. He reeled and fell, but before he had fairly touched the ground I was upon him, knife in hand, and had driven the keenedged weapon to its hilt in his heart. Jerking his warbonnet off, I scientifically scalped him in about five seconds.

The whole affair from beginning to end occupied but little time, and the Indians, seeing that I was some little distance from my company, now came charging down upon me from a hill, in hopes of cutting me off. General Merritt had witnessed the duel, and realizing the danger I was in, ordered Colonel Mason with Company K to hurry to my rescue. The order came none too [sic] soon, for had it been given one minute later I would have had not less than two hundNative Americans upon me. As the soldiers came up I swung the Indian chieftain's top-knot and bonnet in the air, and shouted: "The first scalp for Custer."

Concerning the friendship between Cody and Edward Albert bringing the positive results for the Wild West and the performance for Queen Victoria, historian Don Russell informs us:

The command performance for Queen Victoria, was the high spot to date for Buffalo Bill's

Wild West. In more than a quarter of a century since the death of her consort, Prince Albert, the Queen had not attended any kind of public entertainments, although she had commanded some companies to give plays privately at Windsor Castle. However, when it was explained that the Wild West could not feasibly be brought in its entirety to the castle grounds, she agreed to go to the Earl's Court arena. Having broken one precedent, she was ready for another. When the American flag was presented according to the usual Wild West custom, the Queen rose from her seat and bowed deeply and impressively towards the banner, and her entire party joined in the salute, says Cody, "there arose such a genuine heart-stirring American yell from our company as seemed to shake the sky. It was a great event. For the first time in history, since the Declaration of Independence, a sovereign of Great Britain had saluted the star-spangled banner and that banner was carried by a member of Buffalo Bill's Wild West!"

The Queen had attended the performance with the strict understanding that she must see the entire Wild West within an hour. Nevertheless, Her Majesty stayed for the fifty-minute show and afterwards commanded that Buffalo Bill and the featured performers of the exhibition be presented before her. Nate Salsbury, Annie Oakley, and Lillian Smith accompanied Cody, Red Shirt, and a group of Oglala Lakotas to meet the Queen. Evidently, Black Elk was part of Red Shirt's delegation and said:

After the show was over they put all of us Indians in a row according to size. I was next to the youngest boys and girls. Then Grandmother England came out and shook hands with us. She made a speech, saying that she was seventy-five years old...When she finished her speech to us, she raised her hand and we all hollered and yelled and gave cheers. She did not care much about seeing the white men in the show. She only shook hands with the Indians. Then about fifty chariots came in and we did not see which one she got into, but she got into one and left.

The above is from the book, Buffalo Bill and Sitting Bull, by Bobby Bridger. 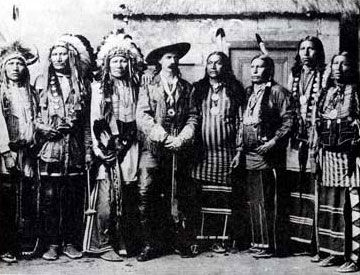 Buffalo Bill and His Indian Chiefs
Photo from the book, Encyclopedia of
American Indian Wars, by Jerry Keenan. 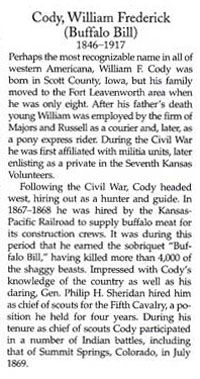 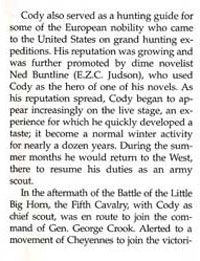 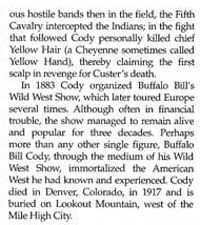 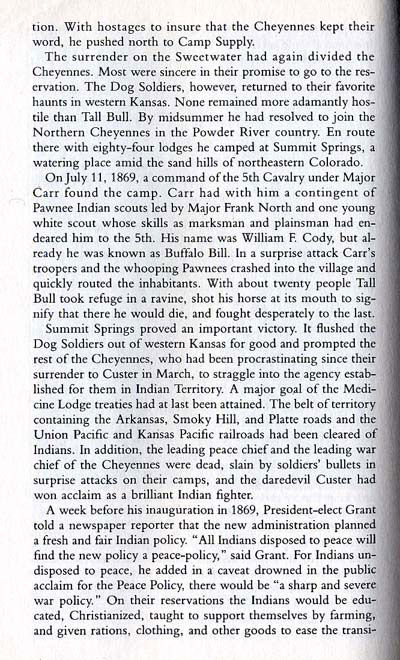