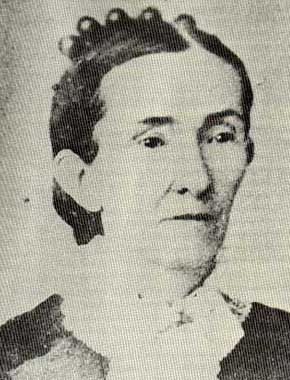 Mary Tarkington Brown Crawford (circa 1832-1916),
widow of John Brown, who, in November 1860, was
killed, scalped, and mutilated by the Comanches near his
home located sixteen miles northwest of Weatherford and about
four miles southeast of Whitt. Mary Brown was struck in the
forehead by a Comanche warrior's arrow, leaving a pronounced "widow's peak" along her hairline. Mrs. Brown later married Simpson Crawford, noted frontier rancher of Palo Pinto County.
(From the book, Savage Frontier, by Stephen L. Moore)

At the time of this particular raid, there were less than two hundred families living in Jack County. Since it was reasonably certain the savages would extend their foray further on into the settlements, the local citizens hastily dispatched a messenger to Weatherford, for aid and to alarm the people. At that time John Brown was living sixteen miles northwest of Weatherford, near Rock Creek, and on the Weatherford-Jacksboro Road. The messenger reached his home just before day, November 27, 1860. From Mr. Brown, this "Paul Revere" of the Western Frontier secured a fresh horse and hurried to Weatherford. Mr. Brown had about thirty-five head of horses penned in the peach orchard near the house. About sunrise he saddled one of his slowest ponies, and started to the home of Mr. Thompson, his neighbor, who lived about two miles to the West. Since the Indians had not been previously depredating in that section he told his wife before he rode away, that the Native tribespeople would not come that far south on this particular raid, but would eventually do so. He then started unarmed on a slow pony to the Tompson home.

About thirty minutes after Mr. Brown had gone, and before reached the home of Mr. Thompson, two of his slaves, an African woman, and a boy about fourteen years of age, were on the outside of this yard a short distance to the southwest of the John Brown home. This house was newly constructed and was one and a half story "Log Cabin mansion."

To their sudden amazement, when they looked up the road towards Jacksboro, and saw about fifty or sixty Indians riding rapidly towards the house, the African Woman told the boy they must hide or else be killed. This brave African lad said, "No. I'll die with de misses and chilluns." The African woman then ran and hid in the high grass in the peach orchard, but the boy hurried to the house and related to Mrs. Brown, the Indians were coming. The approaching warriors could now be plainly seen. Mrs. Brown hurriedly gathered the following children: Mary, about ten years of age, John, about eight, Teranna, about five, and Seaph, about two months old, and took them upstairs. She then closed the trap door. About this moment it was discovered that Annie, about two and one half years of age, was missing, So the brave African boy named Anthony Brown, after the Indians had completely surrounded the house, rushed down stairs in search of Annie. She was found playing in the African cabin, about thirty feet from the house. Annie at the time was dipping ashes with a spoon. The African boy and the colored boy carried little Annie upstairs. About this time Mrs. Brown heard the rattling of chains, and since her husbands bridle reins had chains next to the bits, she thought it was he coming. So she looked out of a window and said, "Have you come." About that moment she discovered a savage in the very act of shooting her. So she jerked back only in time to receive an arrow in her ear. This weapon struck the window facing, where she had been standing.

During this exciting time, the Indians were also chasing the horses in the orchard and the African woman then hiding in the tall grass later stated that if she had not been hidden under the tree, the Indians would have ridden over her several times.

The blood thirsty savages cut the bell from one of the horses, and started the herd westward toward the home of Mr. Thompson. They had gone only about one-half mile, when the warriors met Mr. Brown unarmed. He was soon killed with a lance, and scalped. But it is generally supposed he wounded one of the warriors with a pocket knife, for evidences of a wounded Indian were later discovered.

The Indians continued their course westward, crossed the line from Parker into Palo Pinto County, and next appeared to exact their toll of human lives, at the home of Ezra Sherman, who lived on Stagg's Prairie, then known as Betty Prairie, and located a few miles north and east of the present city of Mineral Wells.

Note: Before writing this article, the author personally interviewed A.M. Lasater, who on June 8th, 1876, married Annie Brown, the little daughter playing in the ashes with a spoon when rescued by Anthony, the African boy. Mr. Lasater not only heard his mother-in-law many times relate this story, but remembers the occurrence himself, for he was a boy several years of age when this occurred.