John F. Bottorff lived within one and one-half miles of Uncle Archie Modlin, on the Brazos River, about eight or ten miles west of Graham, and about six miles southeast of Newcastle; and numbered among the first settlers in that section. During the fall of 1859, he started to Weatherford to mill; and was driving three yoke of oxen. He usually went unarmed, although Wm. Marlin, his neighbor, often told him he would be killed by the Indians. On this occasion, Mr. Bottorff only had a very small six shooter. When Dillingham Prairie, in Jack County, was reached, he was surrounded and quickly massacred by savages. The Indians also cut off an ox-tail and took it away. Uncle Billy Kutch and his brother from a considerable distance, saw twenty or twenty-five Indians commit this dastardly deed, and scalp their victims. The local citizens let Mr. Bottorff remain in the wagon during the night and buried him the following day in a box made of scrap boards. He was buried near the edge of Dillingham's Prairie at a place now known as the Van Houser Graveyard. Uncle Billy Kutch, Ed Ribble, and about seven others, followed these Indians to the Little Wichita. They were unable to overtake them however, but found where the Indians had eaten the ox-tail. 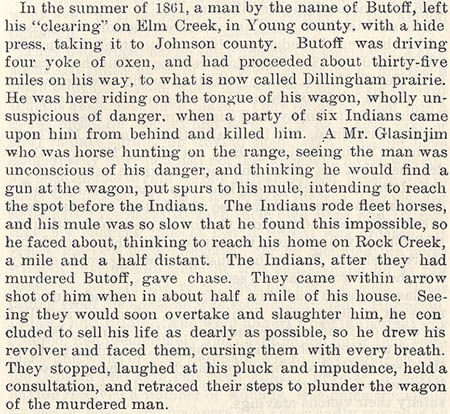 The above version of the story is from J.W. Wilbarger's book, Indian Depredations in Texas.