Fort Sumner, NM, 2 miles east of the village of Fort Sumner on Billy the Kid Road. 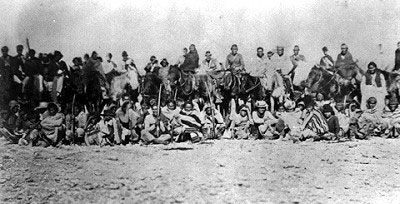 Some of the more than 8,000 Navajo who surrendered to Kit Carson during his 1864 campaign of destruction  through their homeland. Carson forced his prisoners to  take the "Long Walk" across New Mexico to a barren reservation set aside for them along the Pecos River at Bosque Redondo.  Photo courtesy National Archives.

On October 31, 1862, Congress authorized the creation of the Fort Sumner. General Carleton initially justified the fort as offering protection to settlers in the Pecos River valley from the Mescalero, Kiowa and Comanche. He also wanted to and then created the Bosque Redondo reservation, a 40 miles square area. 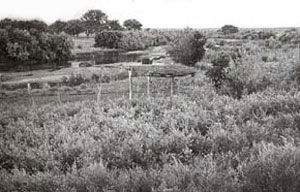 The purpose of the reservation was to be self sufficient, while teaching Mescalero Apaches and Navajos how to be modern farmers. General Canby, who Carleton replaced, first suggested that the Navajo be moved to a series of reservations and be taught new skills. Some in Washington thought that the Navajos did not need to be moved and a reservation should be created on their land. Some New Mexico citizens encouraged death or at least complete removal of the Navajo off their lands. Army Officers and Indian Agentspointed out that the Bosque Redondo had poor water and lacked of firewood for the numbers of people who were going to be put there. The reservation plan for the Mescaleros and Navajos continued.

Colonel Kit Carson was given the order to do whatever necessary to bring first the Mescaleros and then the Navajos to the Bosque Redondo. The Navajos called this as the Long Walk.

There were about 9,000 Navajo and several hundred Mescalero Apache interned at the Fort. Conditions in the camp were poor. The Navajo and Mescalero Apache had long been enemies and now that they were in forced proximity to each other, fighting often broke out. The environmental situation was bad. The interned Natives had no clean water, it was full of alkaline and there was no firewood to cook with. The water from the nearby Pecos River caused severe intestinal problems and disease quickly spread throughout the camp. Food was also in short supply because of crop failures and the typical and usual "inefficiencies" in getting outside supplies to most reservations. In 1865, the Mescalero Apache, or those strong enough to travel, managed to escape to their own country. The Navajo were not allowed to leave until three years later when it was agreed by the Army that Fort Sumner was a failure.

A treaty was negotiated with the Navajos and they were allowed to return to their homeland to a "new reservation". This experiment, while a failure and cruel to the Navajo, also bound them together in new ways.