Boone Station State Historic Site memorializes one of the state's most important historical figures. Daniel Boone established Boone Station in 1779 because he thought Fort Boonesborough was too crowded. However, the Boone family suffered many hardships during the three years they lived here, including the deaths of Daniel and Rebecca's son Israel, and their nephew, Thomas, at the Battle of Blue Licks. Samuel Boone, Daniel Boone's brother and father of Thomas, is buried at the site. Israel Boone and Thomas Boone are buried at Blue Licks; Edward Boone, brother of Daniel Boone, is buried where he was killed in Bourbon County, Kentucky. Sarah Day Boone, wife of Samuel Boone, is interred in Missouri. 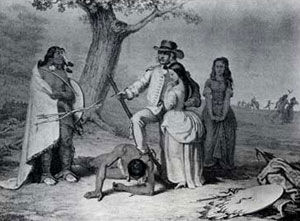 Daniel Boone and friends rescue Betsey and Francis Calloway as well as their daughter, who had been carried off by Indians while crossing a river in Kentucky. Photo from the book, Encyclopedia of American Indian Wars, by Jerry Keenan.

After seeing the site and reading the historic markers, visitors can picnic on one of the several picnic tables on the site's 46 acres. Park grounds are open all year.

Boone Station is off I-75 at exit 104 south of Lexington. Travel east to Athens on KY 418. Take N. Cleveland Road to Gentry Road. There is no telephone. Call the state park central offices at 502-564-2172 about Boone Station. The closest staffed park is Fort Boonesborough State Park.