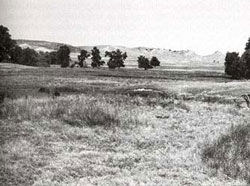 Bluewater Creek
From the book, Encyclopedia of Indian Wars, by Gregory F. Michno.

With the best interests of his charges in mind, Fort Laramie Indian Agent Thomas Twiss cautioned the tribes camped near the fort not to cross paths with Harney's task force. Most heeded the warning, but a group of Brule led by Little Thunder, the successor to the late Conquering Bear, did not. They remained camped at Bluewater Creek, not far from Ash Hollow. On September 3, 1855, Harney told Little Thunder to surrender those Brule involved in the Grattan Massacre. Naturally, he refused, and, as might have been expected, Harney attacked immediately.

Harney had prepositioned his troops for a pincer action, with the dragoons on the north side of the Brule encampment, and the infantry on the south. The Bluewater Creek fight, often misnamed as the Battle of Ash Hollow, was a resounding defeat for the Brule. Though Little Thunder himself escaped, most of his people were killed or captured. Harney lost seven troopers, but there were between eight-six Brule warriors killed in action, along with a number of women and children. In addition, about seventy Brule women and children were taken captive.