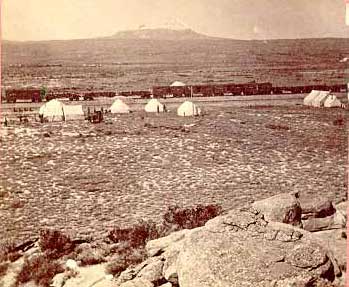 The Black Butte station, fourteen miles to the west of Big Pond, was named for a large black colored butte about five miles to the west of the station. This swing station was also located along Bitter Creek. At this point along the creek, the water was so tainted with alkali that oatmeal was added by the station cook to hide the taste.

It was near this station that emigrants discovered that coal found in this area was able to be burned in their camp fires. Today the land that the Black Butte ruins are found upon is owned by the Black Butte Coal Company, an open pit mining operation. They have erected a fence around the ruins, and will conduct a guided tour.