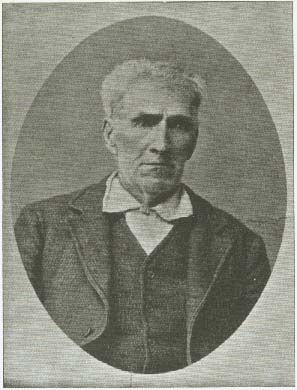 The little community of Brazos is situated in the area where Big Foot reported he was captured by Comanches while eating the finest pecans he had ever tasted. Take 129 east from Santo and admire the landscape Big Foot found so beautiful.

One of the most original characters in Texas was W.A.A. Wallace. Everybody in Texas knew him as "Big Foot' Wallace, and so he shall be called in this narrative. He was born in Rockbridge County, Virginia, in 1817, came to Texas in 1837, and later joined Hays in San Antonio. His giant stature and childlike heart, his drollery and whimsicalness endeared him to the frontier people. His inexhaustible fund of anecdotes and a quaint style of narrative, unspoiled by courses in English composition, made him welcome by every fireside. He went on the Mier Expedition, and many stories are told of his strange antics.

Though often attacked by the Indians, he managed to live until 1899 and to die a natural death. He is buried in the state cemetery at Austin, his grave marked by a small stone engraved with a just and classic epitaph.

October 24, 1837, Big Foot Wallace took his gun and hunting equipment, left his camp alone and ascended to the summit of a nearby hill in territory that afterwards became Palo Pinto County. From here Wallace descended the hill and after going through a nearby path was hemmed in a small valley, where he found an excellent variety of pecans. Wallace stated these were the finest nuts he had yet seen. When he had gathered two or three handfuls, and while resting against a tree to enjoy the nuts, Wallace was surprised to see a band of twelve or fifteen Indians riding rapidly in his direction. His only hope of escape was to conceal himself in the nearby underbrush or steal away into an adjacent canyon.

Big Foot Wallace started off in a long trot, and after going for a considerable distance, could see the Indians still trailing him, but he successfully reached the nearby canyon, and tried to conceal himself in the crags and rocks. Big Foot Wallace, however, soon saw he would be overtaken, for the Indians were fastly following his trail. So this veteran of the Southwest hid behind a large rock. In a moment or two a lone Indian was seen traveling along his trail in a "Dog trot." The famous old frontiersman, who was then in his younger days, gave a low whistle, which caused the Indian to halt. At that moment Wallace shot him down, and the Indian fell dead in his tracks.

Wallace reloaded his gun as soon as possible and then pushed on. He had gone only about half a mile, when again he struck another canyon coming in at right angles to the one he had been previously following. Up this he wound his way for he thought he was being pursued by the remaining Indians. Soon dark overtook him and when he discovered he could go no farther because of his exhaustion, he soon fell fast asleep among the cliffs and craigs. He did not awake until the sun was well on its way during the succeeding day. 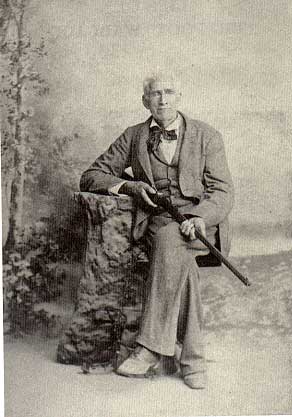 Wallace was now lost approximately two hundred miles from the nearest settlement. Noon came and he was tired and hungry. But in this hour of his bewilderment a large buck deer came down to the creek for a drink and stopped within twenty yards of where Wallace was sitting. He felled him in his tracks, and Wallace said, "This was the fattest venison I ever saw." It was not long until he had him roasting. After satisfying his hunger, he cut off as much of the venison as could be safely carried. It was now night, and the veteran old frontiersman began to look around for shelter for it was drizzling rain and unpleasantly cold. Nearby he found a shallow cave in a cliff, where he made a bed of grass. Wallace said, "I was lucky in finding this cave, for that night there fell a torrent of rain, which would have made camping out of doors extremely unpleasant."

On and on he journeyed. Near a splendid spring Wallace found the remains of old Indian camps, and here he picked up a Mexican goard, which was used as a canteen for water. In this vicinity the lonely wanderer found a companion, a lost dog which Wallace called Comanche.

After eating his breakfast Big Foot Wallace filled his goard canteen with water and with gun in hand, and other utilities hanging on his side, he continued his journey with his companionable dog at his heels. But the following day Big Foot sprained his ankle, so he was compelled to lay up in a cave for several days. When Wallace awoke on the morning of November 21st, a dozen Indians were coming rapidly toward him. He resolved to sell his life as dearly as possible and kill as many of the Comanches as he could. But one of the Indians asked Wallace in Spanish, who he was and what he was doing. Wallace, who could also speak a little Spanish, told them he was an American lost from his party and on his way back to the settlements. The Indian then made signs for Wallace to put down his arms, which he did, for he saw that resistance would bring him nothing and perhaps if he would be friendly, the Indians would possibly spare his life. Wallace's hands were then bound with buckskin, and he was carried to their camp. 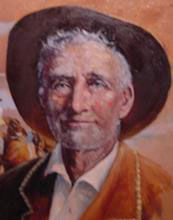 After much pow-wowing, several warriors came into the lodge or tepee where Wallace was confined, and one of them proceeded to black his face and hands. Much excitement prevailed among the Indians, and Wallace was led out to a nearby point where preparations were being made to burn him at the stake. The dry wood was piled thickly around his feet, and the principal chief made a thrilling speech to his warriors. Afterwards a big dance started and the Indians were singing their wild songs. Wallace said:

"I thought sure enough my time had come, and I tried to summon up courage enough to meet my fate like a man. I don't know how far I would have succeeded in this, for just at this moment an old female tribesperson, who had taken a liking to me in the lodge, rushed through the crowd of painted warriors and began to throw the wood from around me. One of the warriors seized this female tribesperson and put her out of the rank by main force; but she adjusted herself to the cause, and made them a regular speech, during which every now and then turned and pointed at me. I was satisfied that for some cause, I knew not what, the old female tribesperson was doing her best to save me from burning at the stake, and it is hardly necessary to say that I wished her success from the bottom of my heart. The crowd listened to her in silence for some time when some began as I thought to applaud her and others cry out against her; but it seems that she at last brought over the majority to her side where after a great deal of jabbering a number of women rushed in between the warriors and untied me from the stake, and handed me over to the old female tribesperson for safe keeping, and somehow I had understood but little of all that had been said on either side for or against me, I knew that I was saved, at least for the time. I felt as much relieved in my mind as when I drew the white bean at the City of Saltillo. I learned afterwards that the old female tribesperson had lost one of her sons in a fight with some of the neighboring tribes, and that she had set up a claim to me according to Indian customs, in such cases as a substitute."

"I might lengthen out my story a good deal, by telling of all that occurred to me while I was with these Indians-I went with them upon their buffalo hunts, and once upon a foray with them into Mexico, where I acquired a considerable reputation as a promising young warrior in a hard fight we had there with the Mexican Rancheroes, etc."

The chiefs that captured Wallace and intended to put him to death also took a liking to the white companion and offered his sister to Wallace for a wife.

When Wallace had been with the Indians for about three months, he became despondent and discontented and longed to return to his own people, and this despondency was noticed by the adopted mother and her son, Black Wolf. Black Wolf, who was Wallace's brother by adoption, said to Wallace: "My brother, what is it that makes you so unhappy and discontented, for it seems for some time you have had something on your mind. Has anyone mistreated my brother." "No," said Wallace, "everyone has treated me well, but I tell you frankly my brother, I am anxious to see my own people."

"I shall be very sorry if you leave us, and so will my old mother, but it is not strange that you should wish to see your own people again and you must go. I will help you all that I can to reach the settlements in safety. "But be careful," Black Wolf said, "not to say a word about this to anybody for if you should attempt to escape and be recaptured nobody could save your life and I should be put to death for having aided you."

After secretly making necessary preparations, Wallace led by Black Foot left the camp on a pretense of hunting bear. But before he left, the old Indian mother presented her adopted son with a necklace made of grizzly bear claws and porcupine quills, and also presented him with a large copper ring to wear in his nose. As they advanced, the faithful dog, Comanche, followed along behind.

On the morning of the second day, Black Wolf traced upon the ground a map of the route Wallace had to follow, and indicated accurately all of the ranges of hills and water courses by which he had to pass. The Indian brother then bade Wallace good-bye, shouldered his gun and took his course back towards the home of the savage mother. In due time Wallace safely reached the settlements, and his faithful dog Comanche remained his loyal companion until he died of old age.

This initial experience of Wallace helped to produce one of the most famous frontiersmen known to the early history of Texas. 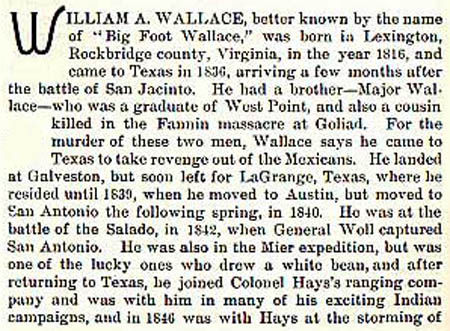 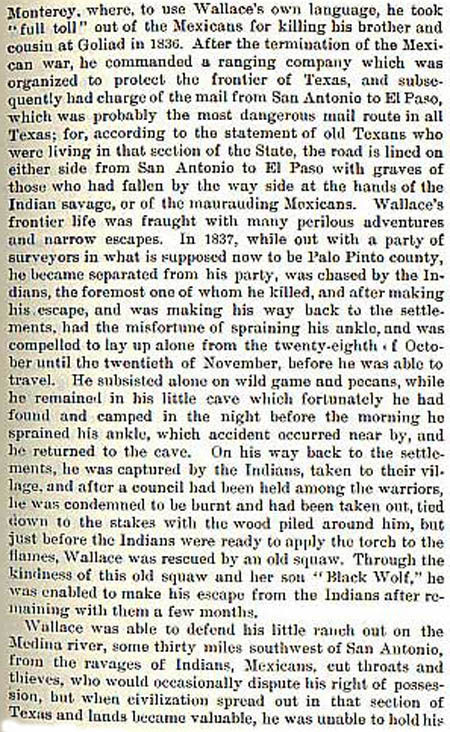 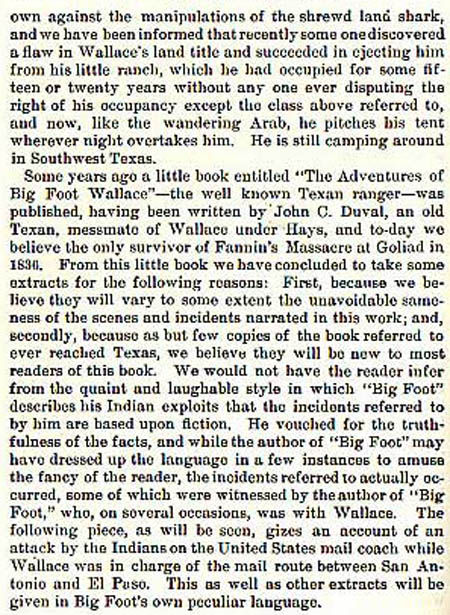 The pages above are from the book Indian Depredations in Texas by J.W. Wilbarger. More Bigfoot