Indians Murder Andrew Berry and Boy and Leave Another for Dead

During 1864 Andrew Berry had driven two yoke of oxen from his home about five miles away to the frontier log cabin of Mr. and Mrs. Thomas Lee Hamilton, who lived in the brakes along the Brazos, about fifteen miles southwest of Weatherford. He had with him two small red-headed boys, about ten and five years of age. It was nearly noon. Mrs. Hamilton informed Mr. Berry the Indians were "In" and insisted that they remain for dinner. But Berry and the two little boys declined to stay, and started homeward with their ox-wagon loaded with pumpkins and corn.

These frontier citizens had not whipped their oxen very far, however, when several Indians came charging toward them. Berry and the five year old boy were almost instantly killed and scalped. The ten year old lad was also scalped and left for dead, and, perhaps, would have been killed. But a detachment of Capt. Newt White's Company G, was after the Indians and only a few minutes behind. This the Indians, no doubt, knew and did not take the time to remain and see that all three died.

After the Indians had gone, the older boy crawled to a haystack where he hid in the straw. But was soon found and later recovered from his wounds.

Usually the Indians made small children captives. But in the present case the savages were being hotly pursued and had no time to handle captives. Too, the natives had black hair and were always less-inclined to scalp a black-headed person, thinking, perhaps, black hair indicated Indian blood. They always treasured very highly a red-headed scalp, for no Indian ever had red hair. So these two little red-headed freckled faced boys might have been spared, had they not had red hair.

The Indians scattered the pumpkins, and bursted several over Berry and the boys' heads.

Note: Author personally interviewed Mrs. Thomas Lee Hamilton mentioned above, James and Samuel Newberry, A.M. Lasater, and others, who lived in Parker and Palo Pinto County at the time.

The following account of the incident is from the book, Indian Depredations in Texas, by J.W. Wilbarger. The details vary in this second version, as it claims that Berry had one child with him instead of two. 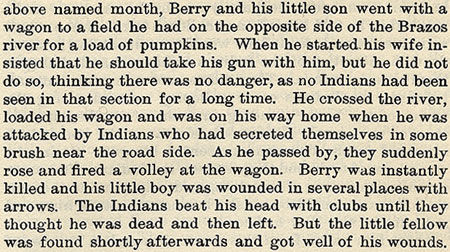