The different authorities are not in accord concerning the date of this circumstance. But it probably occurred near the close of the Civil War, and will be reported at this time. Blackwell and Harve Sullivan were out in a watermelon patch on Rock Creek in Parker County, about two miles east of the present town of Whitt. When Indians charged upon them, Ben Blackwell was captured, and Harve Sullivan, two or three years older, and about twelve years of age, successfully made his escape. One Indian, however, caught him by his home-knitted yarn suspenders. But Harve seemed to be in a hurry. So he broke his suspenders, outran the savage, and was home in a short time. Dole Miller reported that David White and African Brit Johnson were instrumental in recovering Ben Blackwell from the Indians, and returned him to his people. 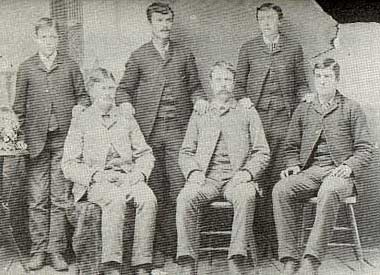 Note: Author personally interviewed: Dole Miller, A.M. Lasater, and others who lived in Palo Pinto and Parker counties at the time.

The following story from Doyle Marshall's book, A Cry Unheard, has a completely different spin.

Word that the Indians were in the area had not yet reached the Sullivan farm located at the foot of the eastern slope of Slipdown Mountain. As Margaret Sullivan prepared to leave the farm to care for a sick woman, she cautioned her sons, thirteen-year-old Robert Harvey and six-year-old Thomas Jefferson and their two Blackwell cousins, Joe, ten, and Fremont, seven, to watch closely for Indians.

Following the instructions of Margaret's sister, Charlotte Blackwell, the boys went to the garden and began picking peas for winter storage. As they alternated between playing and picking peas, they forgot to watch for Indians. No doubt the marauders had been observing for some time the movements of the family from the south end of Slipdown Mountain before five of them began to plunder the Sullivan farm. The boys were alerted to the Comanches' presence by a commotion in the horse lot, where an Indian was putting a rope around the neck of the Sullivan family's balking work horse. At the same time, four other Comanches bore down on the horrified boys in the pea patch. Harvey Sullivan grabbed Tommy's hand and, with Joe and Fremont Blackwell, began to run toward the nearby cane patch by the creek. During the chase a steel-tipped arrow tore into Harvey's arm, and a rifle ball struck Joe's hip.

As the Indians gained on the boys, Joe and Harvey were forced to make a painful decision that grieved them in later years. It was obvious to both of the older boys that the Comanches would soon capture or kill them all since, due to their small size and lack of speed, Fremont and Tommy were preventing their escape. In a desperate attempt to, at least, save themselves, Harvey and Joe released the hands of their little brothers and, in spite of their serious wounds, doubled their speed toward the thicket and plunged headfirst into the cane patch, where they quickly disappeared from view. As Joe and Harvey cautiously looked out from the edge of the patch, they saw the raiders swing Tommy and Fremont onto their horses and leave in a dead run. Long after the Indians left the Sullivan farm with their hysterical young captives, Joe and Harvey heard in the distance their little brothers' piteous cries for help.

As Joe and Harvey lay quietly in the cane patch, the pain from their wounds became more intense. After a long wait, they heard voices which, at first, were feared to be those of Indians remaining in the area but later proved to be calls from their fathers as they searched for their missing sons. After moving the boys to the house where the arrow was removed from Harvey's arm and both wounds were dressed as best they could be, Thomas Sullivan and Upton O. Blackwell, referred to in local frontier histories as Hugh O. Blackwell, assembled a search party to rescue their captive sons. The party of neighboring homesteaders following the trail of the Comanches soon found on the trail a small cowbell which had been Tommy's favorite toy from which he had seldom been separated. After following the raiders for about twenty miles to a point south of Weatherford the horse of the lead rider suddenly snorted and shied at the smell of blood. At the edge of the timber lay Tommy's body, "bruised and mangled almost beyond recognition." Tommy's younger brother, John Wright Sullivan, tearfully recalled to his children in later years the heartache experienced by his family at finding that the Indians had taken the little boy's life and mutilated his body and that the crows had pecked out his eyes. Tommy's body was buried where it was found, and his clothing was brought home. Some of the searchers were so disturbed by the grim sight that they were unable to proceed with the search party. Fearing that Fremont had experienced the same fate, the others somberly followed the trail to the Red River, where the search ended.

...Fremont was taken by his captors to the Big Bend of the Arkansas River, an Indian reservation in Kansas, where he was kept several months. During these months of captivity, after having been thoroughly "Indianized," the Comanches accepted him into the tribe. Fremont freely embraced the Comanche way of life, became proficient with the bow and arrow, and learned the language of his captors. During part of the time Fremont was held captive, the band also held two other captives, a white girl and fourteen-year-old Ole Nystel, of Norwegian descent, who was captured in March, 1867 from near his home in Bosque County, Texas, and remained with the band for only three months before being ransomed.

While visiting the reservation for the purpose of purchasing furs, a white trader, Charles Whitaker, noticed the three white captives and notified federal authorities of their plight. When approached by the federal authorities on the matter, the Comanche chief demanded a ransom. It is not known what was paid for Fremont, but Ole Nystel brought $250, paid in part with brown paper, blankets, tobacco, flour, and sugar.

During his months with the Indians, Fremont forgot much about his past civilized life, including his name. When the trader asked about his family, Fremont could remember only his father's first name, Upton, and that he lived near Weatherford, Texas. With this scant information, Whitaker wrote a letter to "Mr. Upton, Weatherford, Texas." The perceptive postmaster at Weatherford delivered the letter to Upton O. Blackwell, and arrangements were soon made for Fremont's return. Blackwell was to meet Fremont at Fort Arbuckle, Indian Territory. He arrived there at the appointed time and waited ten days, but Fremont did not arrive. When Blackwell returned home without Fremont, his wife, Charlotte, was broken-hearted. Later arrangements were made for the federal authorities to deliver Fremont to his grandmother's home in north Collin County, Texas. Blackwell rode the one hundred miles on horseback and brought Fremont home. The child was suffering from scurvy, a common frontier-day malady resulting from a diet excessive in meat and deficient in vegetables.

Considering himself an Indian, Fremont, like most boy captives, preferred the carefree life of the savage and balked at returning to civilization. After returning home he often continued to speak in the Comanche tongue and attempted to establish contact with his adopted Comanche people by going to nearby Gourdneck Creek and signaling with calls resembling the hoot of an owl and the howl of a wolf. He sometimes threatened to return to the Comanches. When he became angry with the other Blackwell children he shot them with his bow and blunt-tipped arrows until they were "blue all over."

Fremont told his family that his captors took Tommy's life because he cried. While raiding the settlements the Indians could not tolerate the noise of a crying child captive since a successful raid depended to a great extent on the element of surprise.