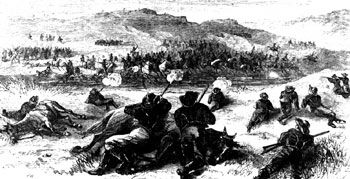 On the evening of September 16, 1868, scouts out of Fort Hays under Major George A. Forsyth pitched camp on the Arikaree Fork of the Republican River in the Colorado Territory. Forsyth had named Lieutenant Frederick H. Beecher, the nephew of famed New York clergyman Henry Ward Beecher, his second in command. Just as they were getting up the following morning, they were charged by several Cheyenne warriors and forced onto a sandbar in the middle of the stream. Roman Nose, the leader of the raid, was mortally wounded during the fighting and died the next morning. His death took most of the fight out of the Indians and they contented themselves with sniping the scouts' horses until all were dead before withdrawing. Lieutenant Beecher was one of four scouts killed and this engagement became known as the Battle of Beecher's Island.

Maj. George Forsyth at the head of 50 frontiersmen, in pursuit of raiding Cheyennes, was attacked by a large party of Cheyennes on the morning of September 17, 1868. Forsyth’s party took refuge on a sandbar in the Republican River located in eastern Colorado. The Indians organized several massed charges, only to be blunted each time. By the afternoon of the 17th, more than 600 Indians participated in the assaults, however, the attacks decreased following the death of Roman Nose, one of the leading Cheyennes. Lt. Frederick Beecher, for whom the battle site is named, and 21 other defenders were killed. The remaining defenders were rescued on September 25 when Capt. Louis Carpenter’s company of 10th Cavalry troops came to their aid. A historical marker commemorates the battle, but the original site has washed away. 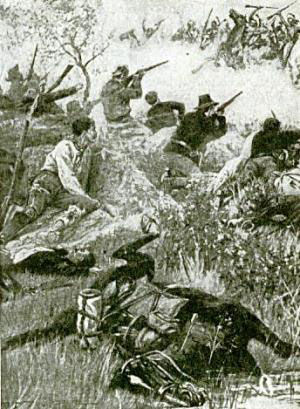 The Beecher Island battlefield is in eastern Yuma County, Colorado, where County Road KK crosses the Arikaree River some 16 miles south of Wray and 9 miles north of US Highway 36.

The Forsyth Scouts and the Battle

Fifty civilian scouts, to be under the command of Bvt. Col. George Forsyth of the 9th Cavalry, were recruited at Fort Harker (near Ellsworth, Kansas), Fort Hays and Fort Wallace in late August and early September 1868 to help counter Arapahoe, Cheyenne and Sioux raids on the Kansas Pacific railroad construction camps then near Fort Wallace, Kansas, attacks on travelers on the Solomon and Smoky Hill stage routes to Denver and raids on settlers in western Kansas and southwestern Nebraska. Lt. Fred Beecher, 3rd Infantry, was detailed to the scouts to be second in command.

On September 10th the scouts were dispatched from Fort Wallace to counter an Indian raid near Sheridan, Kansas. From the 11th to the 16th the scouts trailed a small party of raiders north and west to what is now the Beecher Island Battlefield on the Arikaree River where they camped the evening of the 16th.

Sunrise on the morning of the 17th was greeted with the sound of war cries and gunfire when the scouts were attacked. Badly outnumbered, Col. Forsyth directed his men to an nearby island in the river to establish a defensive position. After a sharp two day battle during which Roman Nose, a war leader of the Northern Cheyenne, was killed the fight settled down to a siege with the 50 scouts still dug in on their island surrounded by approximately 750 Cheyenne and Sioux braves. Four scouts were killed on the 17th and 18th; Lt. Fred Beecher, Acting Surgeon J.H. Mooers, George W. Culver and William Wilson. About 20 others were wounded including Col. Forsyth who had a head wound, a broken leg and a gunshot wound in the other thigh. With their food exhausted the scouts were soon reduced to a ration of spoiling horse meat and water. 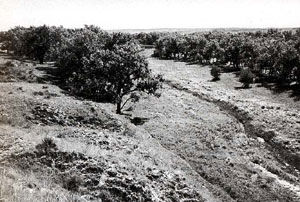 Picture of Beecher's Island from the book,
Encyclopedia of Indian Wars, by Gregory F. Michno.

Forsyth dispatched two-man messenger parties to walk to Fort Wallace, some 75 miles southeast of the battlefield, during the nights of the 17th, 18th and 19th. The pair sent on the 18th were forced to return to the island when they couldn't find a way through the Indian picket lines. The other four scouts reached Fort Wallace within an hour of each other on the 22nd. Relief forces were immediately dispatched to the battlefield. The first to arrive was Company H, 10th US Cavalry, which reached Forsyth the morning of the 25th and found the battlefield empty except for debris from the fight and the surviving scouts. Scout Louis Farley died the same day from wounds received on the 17th and was buried on the battlefield along with the other four dead scouts.

By September 30, 1868 everyone was back at Fort Wallace where a sixth scout, Thomas O'Donnell, died November 18, 1868 in the Post Hospital from his wounds and was buried in the Fort Wallace Cemetery. By the end of the year the Forsyth scouts were disbanded.

Two companies of the 5th US Infantry, Fort Wallace, guided by Forsyth's chief scout Abner Grover, returned to the battlefield in December 1868 to recover the remains of the five scouts buried in September. The remains of George W. Culver and Louis Farley were recovered. However, the detail failed to recover the remains of Lt. Beecher, Surgeon Mooers and Scout William Wilson. Scouts Culver and Farley were re-interred in the Fort Wallace Cemetery. When the Fort Wallace military post closed in 1882, their remains were moved to the Fort Leavenworth Post Cemetery.

The Reunions, the Monuments and the Association 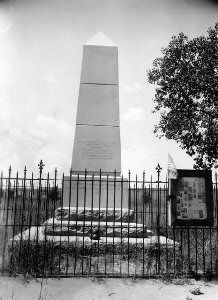 In the late summer of 1898, as the 30th anniversary of the battle approached, Chalmer Smith, who had been a member of one of the relief troops, and James J. Peate, of the Forsyth Scouts, both living at Beverly, Kansas, decided to return to Colorado and see if they could locate the battlefield and island. They invited another of the scouts, Henry Harrison Tucker of Oklahoma, to join them. With the help of Frank and Charles Reeck, who had settled near Beecher in 1876 and remembered all the horse skeletons still on the battlefield, the three veterans placed a sandstone cairn with an engraved slab "Battle of Beecher Island, September 17, 1868," marking the site.

The battle veterans 30th anniversary visit prompted the Vernon and Wray posts of the Grand Army of the Republic (GAR), civil war veterans, to hold a joint meeting at the site in September 1899. At that first meeting it was decided to form a group to create a memorial and park at the battlefield as a place to hold annual reunions of veterans, their families and friends. In the fall of 1899 the Beecher Island Park and Memorial Association was incorporated, with Major William R. Hayes of Denver named as president of a three man board tasked to acquire the battlefield site for a park and raise funds for a monument. In 1900 the Association spent $100 to erect a wooden monument to symbolize the granite column they hoped to place. The Association held reunions in 1900 and again in 1901.

At the 1901 meeting the veterans voted to disband the board of the existing association and form a new one. Out of that meeting the Beecher Island Battle Memorial Association was created with a twelve man board.

In August 1903 the Association was again reorganized and reincorporated but retained the 1901 name.

The Colorado and Kansas Legislatures were petitioned to furnish $5,000 each toward building a suitable joint monument on the battlefield. In early 1905 both appropriations were made for $2,500 and in April 1905 the Association asked for bids for a $5,000 monument. The contract was granted in May 1905 to the Denver Marble and Granite Company for the monument that was dedicated at the 1905 Reunion. Many of the surviving scouts attended the dedication.

Early reunions were held entirely in the open or under large canvas tents and lasted almost a week. In 1925 the Colorado Legislature appropriated $15,000 to build the Memorial Association building on the site. The funded design was about 35 feet short of what was thought to be required to seat those attending the reunion so it was decided to erect the brick building with an open end closed by a temporary board wall to allow future expansion. That decision lead to the distinctive brick and board design so evident in photographs.

The Annual Beecher Island Reunions continue to be held on the third weekend of September each year hosted by the Beecher Island Memorial Association.

We received the following e-mail from a visitor to our site:

I found your page while searching for dates for the memorial this year...I plan on making a motorcycle trip up there, if time permits.
Take care, Chris Horn, McPherson, KS