One of three sites of the Nez Perce National Historic Park in Montana, the Bear Paw Battlefield is located 16 miles south of Chinook on Highway 240. At this site, Chief Joseph of the Nez Perce surrendered on October 5, 1877 after a 1,300 mile retreat. It was here that Chief Joseph made his eloquent speech of surrender, stating, ‘From where the sun now stands, I will fight no more forever.’ A self guided trail, picnic tables, and restrooms are available. Overnight camping is not permitted. Interpretive signs and markers recount the events of this historical battle. NPS Park Ranger available. 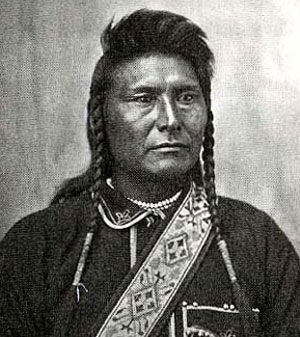 Picture of Chief Joseph from the book,
Encyclopedia of Indian Wars, by Gregory F. Michno.

Bear Paw Battlefield is the final stop on the Nez Perce National Historic Trail. The 1,300 mile trail starts in Joseph, Oregon, and follows the path of the non-treaty Nez Perce bands during the 1877 Campaign. The trail passes through federal, tribal, state, local and privately owned lands.

The Blaine County Museum, at 501 Indiana Ave., Chinook, is the interim Visitor Center for the National Park Service. The Museum’s presentation ‘40 Miles from Freedom’ describes the Battle and is shown on request. The museum also has a variety of exhibits on local history. The Museum’s hours are subject to change. Call 406-357-2590 for information.

Winter had arrived on the Northern Plains. Temperatures dipped below freezing, and he Nez Perce awoke on September 30 to Snake Creek being iced. over. They also awoke to an attack by the 7th Cavalry. Skilled as any military force against which the U.S. Army had fought, the Nez Perce quickly rallied an beat off the charge. Aiming for officers, the Nez Perce marksmen managed to kill or incapacitate six in the initial volley, greatly crippling Miles's command structure. Not only did Miles's initial attack fail, so too did a secondary assault by the 5th Infantry and later attempts by the 2nd Cavalry to stampede the Nez Perce horses. Miles had lost a staggering twenty-four men killed in action, and forty-six wounded.

Had it not been for the weather and their general exhaustion, the Nez Perce might have picked up and moved out as they had at the Big Hole. Had Miles been Gibbon, he might have let them. But this was not to be. Miles still had the troops-and the artillery-to surround the Nez Perce encampment and put it under siege.

On October 1, Miles came forward under a truce flag, and Joseph agreed to a parley. The talks were inconclusive and the standoff dragged on for four days, with snipers on both sides continuing to take shots at the other.

Howard's column finally arrived on October 4, taking up positions in the cordon around the Nez Perce. Though he was now the senior officer on the scene, Howard graciously permitted Miles to remain in command of the siege-and to take responsibility for the outcome, whatever it was.

Within the Nez Perce camp, thee was less unity, less cordiality and a great deal of disagreement over what to do. Of the principal leaders, Toohulhulsote had been killed in the initial attack, Looking Glass and White Bird favored an attempt to break out, and Joseph favored negotiations. On October 5, the three surviving chiefs decided to separate and follow different paths. Suddenly, a sniper's bullet killed Looking Glass.

Joseph decided that surrender was the only course of action, so he signaled his willingness to parley with Howard and Miles. His final speech, delivered on October 5, is ranked with one of the greatest ever spoken by any military leader in defeat:

I am tired of fighting. Our chiefs are killed. Looking Glass is dead. Toohulhulsote is dead. The old men are all dead. It is the young men who say yes or no. He who led the young men is dead. It is cold and we have no blankets. The little children are freezing to death. My people, some of them, have run away to the hills and have no blankets, no food. No one knows where they are-perhaps freezing to death. I want to have time to look for my children and see how many of them I can find. Maybe I shall find them among the dead. Hear me, my chiefs. I am tired. My heart is sick and sad. From where the sun now stands I will fight no more forever.

That night, White Bird slipped away with a handful of followers. They caught up with a number of people who had escaped on September 30 and slipped across the border. In turn, they linked up with Sitting Bull and his Lakota band, and shivered together through the winter under the watchful eyes of the Mounties. Had it not been for Bear Coat Miles, all of the Nez Perce would have made it.

The following July, White Bird and his warriors would return through Montana Territory to the Lapwai Reservation. Near Missoula, they raided some outlying settlements and were pursued by Lieutenant Thomas Wallace out of Fort Missouli with a small mounted detachment of the 3rd Infantry Regiment. He caught up with the Nez Perce party on the Middle Fork of the Clearwater River on June 21, 1878, where he managed to kill six and capture a number of their horses.

Joseph had made a masterly retreat of over a thousand miles. It was one of the great epic tales of human history, coming to a tragic conclusion so close to the final goal.

After surrendering, Joseph and his followers were not permitted to go to the reservation they had first refused. Joseph was initially confined as a prisoner of war at Fort Leavenworth, Kansas, and later sent to Indian Territory with his followers. He pleaded with the Indian Bureau for his people to be sent back to the Pacific Northwest, but the political powers in the region strongly opposed such a move.

It would be more than two decades before Joseph was permitted to return to the Pacific Northwest, and then not to the Wallowa, but to the Colville Reservation in Washington, where he died on September 21, 1904.

Bear Paw Battlefield is located 16 miles south of Chinook, on Highway 240 on US Highway 2. Full time park ranger, no fee.

All Year, sunrise to sunset.