About one hour after the Indians murdered Gid Foreman, they suddenly appeared at the home of John Baggett, who lived about nine miles nearly north of Cora. Mr. Baggett had gone to the latter place for supplies. Mrs. Baggett had been preparing supper but was temporarily resting on the bed. Jowell and Bettie were playing in a live oak thicket just below the cow pens. Sarah, then fourteen years of age, and some of the other children were also out playing. Sarah told Jowell to open the gate. She thought her father was coming with a large herd of horses. But one second later she realized her mistake and exclaimed, "Joe, it is Indians."

Sarah came running into the yard and three of her smaller brothers and sisters ran through a crack in the fence. They subsequently hid under the bed in the house. Mrs. Baggett asked about Jowell and Bettie and Sarah replied, "Ma, they are in the thicket below the cow pen and the Indians will kill them."

Mrs. Baggett then stood in a chair and looked over the top of the door and could see an Indian bridling the horse. This warrior strung his bow and then went behind the thicket and about the same time she heard Jowell scream. A second or two later Mrs. Baggett saw an Indian throw Bettie from the thicket and one of the blood thirsty warriors ran up to her with an arrow and began to stick it into her side. He then pulled this weapon out and threw it away. The savages then rode about one hundred yards, no doubt, for the purpose of decoying the occupants out of the house. Had they been able to ascertain that Mrs. Baggett and her children were alone and no men present, no doubt, the red men would have murdered most of them and carried the others into captivity. But Mrs. Baggett was too shrewd for them, aware of their intrigues and refused to open the door.

About the same time she saw Bettie get up from the ground and start for the house. But Jowell could not be seen nor heard. Shortly afterwards, Bettie, who had been stripped of her clothing and stabbed seven times with arrows called, "Mother, open the door and let me in." Mrs. Baggett instructed Bettie to go to the back part of the house. Little Bettie, wounded as she was, obeyed her mother's command. Mrs. Baggett also prepared two guns for any emergency. Bettie informed her mother that the Indians had killed little Jowell.

Soon the savages disappeared, and in a short time, the cattle and hogs were coming home. So Mrs. Baggett thought it unsafe to leave the little son lying on the ground. Spurred on my mother love, she risked her own live to recover the corpse. When found, the poor little fellow was stripped of his clothing and scalped. But the Indians, true to their tradition, left a shoe and sock on the left foot.

This tragedy was unknown to the husband and father until he and his brother returned home about ten o'clock that night. Early the next morning, Jowell Baggett, Sr., brother of John Baggett, conveyed the news to the citizens of Cora, and about twelve o'clock, approximately twenty rangers and citizens were on the Indians' trail. When the warriors had a few hours start, however, it was almost impossible to overtake them. Bettie Baggett got well and afterwards married A. I. Kuykendall, who kindly contributed a part of the information of this and the preceding section.

In his book Indian Depredations in Texas, J.W. Wilbarger provides us with a second account of the attack on the Baggett household: 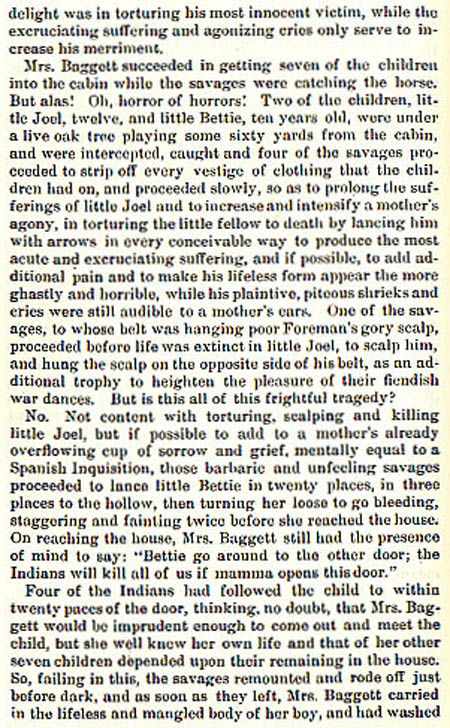