The Brit Johnson marker on 1769 is within view of the L.C. Young gravel road which sits just about on top of the Old Butterfield Stage Line-Military Road and leads to Highway 16 where the Warren Wagon Train Marker is just to the north. You can avoid driving on the gravel road by continuing north to Jean near Cottonwood Springs near the site of the Salt Creek Fight.

This route offers good proximity to Flat Top Mountain where Lone Wolf and the Owl Prophet took their Kiowas for a pre-raid barbeque. They threw beeve halves onto hot coals, allowing them to cook only long enough to burn off the hair. Afterwards, the chiefs took advantage of the panorama to point out to the young braves where they had attacked the Warren Wagon Train three years earlier. This incident changed General Sherman's opinion and, therefore, the army's Indian policy. 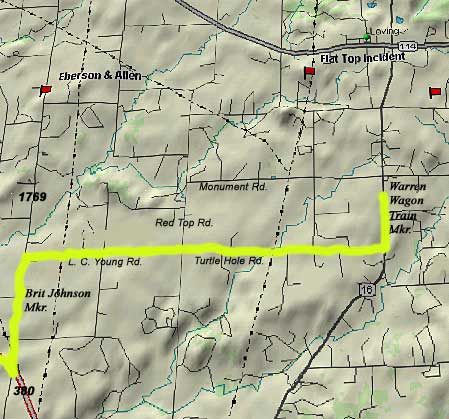 In 1871 Satanta led a war party across the Red River and staked out the military road between forts Richardson and Belknap. Owl Prophet (Brit Johnson's killer) told the Kiowas his oracle instructed they let the first target of opportunity pass because a richer prize would soon follow. This was undoubtedly bad information. The value of Marcy and Sherman's scalps and possessions to the band can only be imagined. Just the same, the barbaric torture and mutilation of the teamsters and the subsequent trial of the chiefs certainly enhanced the tribe's notoriety for viciousness. 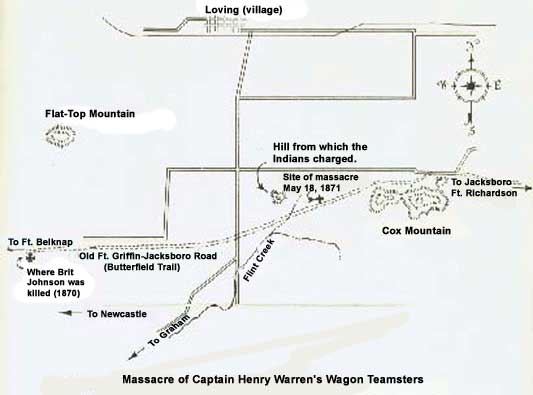 The map above was drawn with the aid of eyewitnesses.
The above is from the book, Carbine & Lance, The Story of Old Fort Sill, by Colonel W.S. Nye; Copyright © 1937 by the University of Oklahoma Press. Reprinted by permission. All rights reserved.

The Kiowas, particularly Satanta, emerged as chief spokesmen for the Plains tribes. His tribe was the greatest beneficiary of the resulting peace policy and in 1863, the Kiowas were temporarily awarded the Texas Panhandle. Satanta established good relations with Custer and enjoyed the protection provided by the army in Indian Territory. 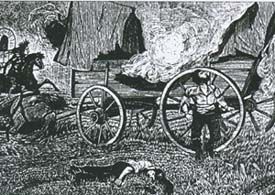 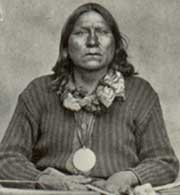 Sherman personally arrested the chiefs and unleashed Mackenzie's Fourth Cavalry to stalk the marauding bands across the Southern Plains. The knowledge and expertise the army gained over the next few years about the geography and the warriors' tactics were invaluable to their eventual victory.