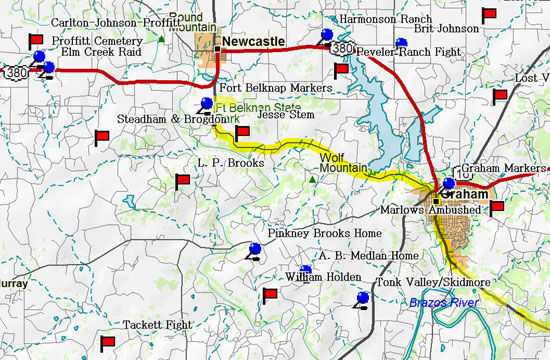 Marcy returned to Texas in 1853 and scouted the headwaters of the Brazos. He consulted with Indian Agent/Major Robert S. Neighbors on suitable locations for the Indian reservations recently authorized by the Texas Legislature. The United States Congress approved the formation of the country's first cavalry unit to provide protection to the settlements and the reservations.

The man in charge of the reservations, Major Robert Neighbors, was a champion for fair treatment of the Indians. His nemesis was John Baylor, a former judge turned Indian agent, until Neighbors fired him for negligence of duty. Baylor's right-hand man, Peter Garland, led an angry posse of cowboys into Palo Pinto county looking for horse thieves. They found and massacred Choctaw Tom's sleeping band mostly because they were off the reservation. It turned out they had a hunting pass. Neighbors wanted Rip Ford to arrest Garland and the others but he declined, claiming lack of authority. The charismatic John Baylor rallied several hundred of the local men in an unsuccessful attempt to storm the reservations. Diff. View 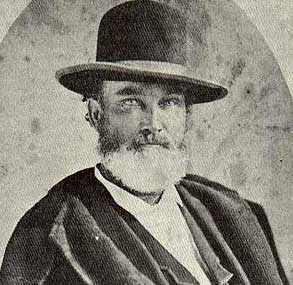 John Baylor
Click on picture for additional accounts of the general.

The settlements could not be pacified and soon politicians demanded that the Indians, many of whom had fought side by side with the Rangers and the Cavalry under Sul Ross, be moved north of the Red River; in effect, into the hands of their enemies. Neighbors was murdered in the main street of Belknap the day he returned from escorting his charges to their new home.

More on the Brazos Indian Reservation

Graham has a fifties-era courthouse surrounded by the state's largest square composed of two blocks surrounded by shops and offices that make up most of the downtown district. Highway 67 runs along the north end of the square and just to the west it connects with Highway 61 which will take you to Fort Belknap. 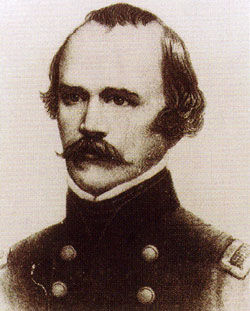 Colonel Albert Sidney Johnston led the Second Cavalry into Fort Belknap in the middle of one of North Texas' worst reported blizzards. Early in 1855, he led his command across the Red River and arrived at Fort Belknap only to find an absence of shelter and the Brazos frozen six inches deep.

Johnston was well suited; as Texas' former Secretary of War, he'd directed the Republic's victories against the Comanches. The colonel understood the importance of good horseflesh as well as a proud esprit de corps. Each troop had its own color of horse, all selected from Kentucky thoroughbred farms. The Second Cav was a plum assignment and the officer ranks were soon filled with future Civil War generals including William Joseph Hardy of Shiloh fame, George H. Thomas (Rock of Chickamauga), John Bell Hood, famous for his failure at Franklin, Tennessee and Edmund Kirby Smith, who would conduct the final surrender of Confederate Territory. The list is topped by President Jefferson Davis and his army commanders, Robert E. Lee and Albert Sidney Johnston.

Johnston divided his forces between Forts Belknap and Mason. Effective long-range patrols were coordinated deep into the frontier. Communities as far-flung as Henrietta and Stephenville were established in 1858 thanks to the protection of the Second Cavalry. Later the same year, the Second was relocated to Utah and Indian trouble increased, culminating in the Lost Valley Massacre (Cambren/Mason Massacre) and resulting in a panicked populace.

Texas authorized "RIP" Ford to form a Ranger company to be headquartered near Fort Belknap. In 1859 he led his troops across the Red River and attacked Iron Jacket's Comanche camp in the Antelope Hills. During that day they had a running fight with Nocona's forces, who reportedly arrived to help their Comanche brothers. Ford wisely withdrew his victorious troops from the battlefield late in the afternoon. An even larger force of Comanches under Buffalo Hump were nearby. Later that year the Second Cavalry returned. Earl Van Dorn led them into Indian territory where they attacked and defeated Buffalo Hump's Comanches at Rush Springs. 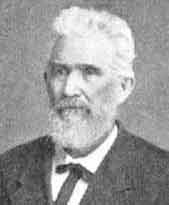 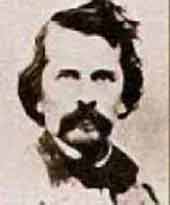 Perhaps in both fights, but certainly in the second, Sul Ross, the teenage son of the Indian Agent, organized and led an auxiliary force of reservation Indians. He and Van Dorn were so badly wounded during the fight that they had to remain on the battlefield for more than a week before they could safely be moved to Fort Belknap. Ross recovered in time to return to Tennessee and finish his senior year at college. He was commissioned a captain in the Texas Rangers after graduation and led the attack on Nocona's camp at Pease River where he rescued Cynthia Ann Parker. He next distinguished himself as a general in the Confederacy and returned to serve Texas for the rest of his life, including an important term as Texas A&M's president. His reputation as a fighter secured the permanence of Texas' first university and in return, served Texas well. Out the outbreak of World War II, the state provided nearly three quarters of a million men for combat; twenty thousand of which were Aggies, mostly officers including 39 generals and one admiral. Six returned with Medals of Honor.