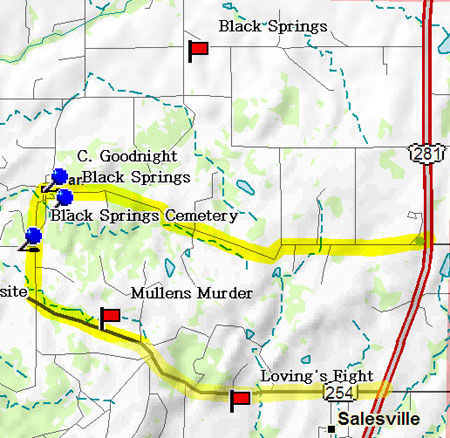 If you have time to visit the Fort Black Springs (Oran) area, Highway 52 crosses 281 on your way to Perrin. Our alternative route takes Highway 52 west to Oran where there are several historical markers in the Old Black Springs Cemetery, including one to Charles Goodnight.

Follow 52 south to 254 and turn back to the west where within a quarter mile there is a roadside park, donated by Mrs. Thelma Hart, containing historical markers dedicated to pioneers Crawford Simpson and Alfred Lane. Simpson, like Goodnight, served in Cureton's Rangers who pursued and fought Nocona's band on the Pease River. A few years later, he married the widow of John Brown, whose husband was one of the victims of Nocona's raid. Alfred Lane was Goodnight's brother-in-law and a noted Ranger himself.

About a mile and a half further west is the historical marker dedicated to George Rice Bevers, the first settler in what would be Palo Pinto County. Take Highway 4 north in Graford where you will soon encounter a marker dedicated to Reuben Vaughan, who built the first house in Palo Pinto County in the Fall of 1854 and whose daughter, Mollie, in August of 1855, became the first white girl born in the county.

The communities of Golconda (Palo Pinto), Black Springs (Oran) and Mesquiteville (Jacksboro) came into existence soon afer Fort Belknap road was completed. Eventually the ranchers produced more beef than the local market would bear. The Chisholm Trail had long been used to trail Texas cattle to Missouri and Kansas and now Loving, Goodnight and several of their neighbors pioneered trailing cattle to forts in New Mexico and Colorado, effectively the real Lonesome Dove. 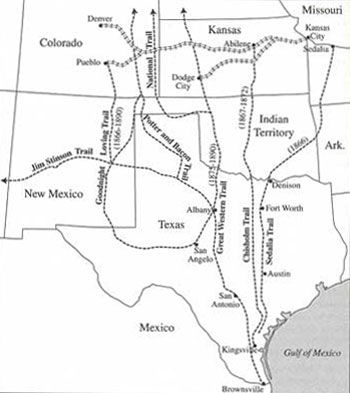 Cattle Trails From Texas Map
from the book, Gone to Texas, by Randolph B. Campbell

Enticed by attractive livestock prices offered by the Union Army, the Plains tribes began large scale raids during the Civil War. The frontier was practically abandoned. Most families sought refuge east of Fort Worth but some of the bravest relocated in stockades. Many, like Fort Black Springs, were small structures meant to protect just a few families. Archer County historian, Jack Loftin, points out that these small forts usually had one fireproof wall though gun slots were included on all four sides. Local historian Bob Bellamy responded recently that the fort was originally a three story affair and is now being reconstructed on the Palo Pinto courthouse grounds.

Goodnight and Loving formed a partnership at Black Springs, now called Oran, where they determined to drive a herd west through Comanche country to the army forts in New Mexico and Colorado. They gathered a large herd from the Keechi Valley, including many of their neighbor's cattle, and trailed them on a perilous, and in Loving's case, fatal drive to New Mexico. Their efforts encouraged other stockmen from East Texas all the way to the Clear Fork to attempt to duplicate their feat.