Follow Main St. north of the square to the red light at the Exxon station. Turn left and follow 920 5.4 miles to the left turn onto 1885, which continues northwest. This follows roughly the same route as the original military road from Fort Worth to Fort Belknap. Details related to the mileage marked along the trail can be found in the tan box below. 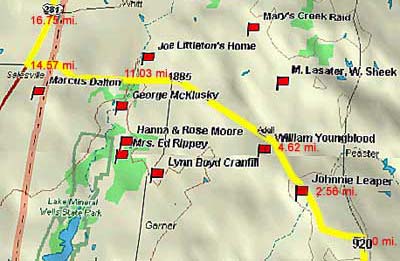 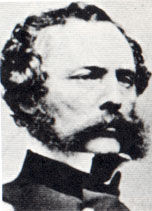 Thanks to the discovery of gold in California, Fort Worth was obsolete as a sentinel on the frontier almost before construction was finished. An army detachment under Captain R.B. Marcy (pictured left) escorted the first large wagon train of goldseekers from Fort Smith, Arkansas through the Rockies on the Santa Fe Trail. Marcy's return route entered Texas through El Paso, skirting the western side of the Hill Country and Cross Timbers and entering Indian territory north of Dallas at Fort Preston on the Red. His return route, referred to as the Southern Route, California or Marcy's Trail, was warmer, less mountainous and popular with gold and adventure seekers. Soon a new line of forts was constructed to protect the western bound traffic. Hwy. 254 roughly follows the military road built to link Fort Worth to the army's new outpost. 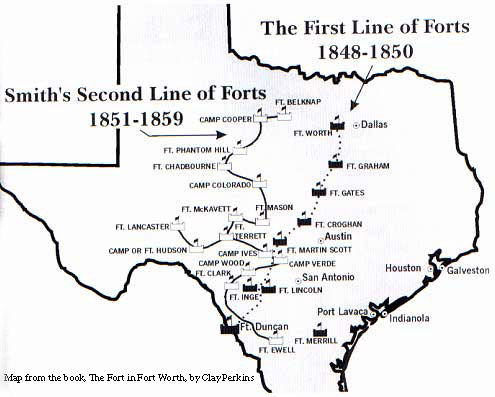 Originally the army intended to man the western forts with infantry and keep the horse dragoons at the eastern line of forts. This was based on the theory that marauders would be trapped between the two forces and it was considerably cheaper to keep the horses where there was plentiful grass and corn cultivation. However, even though there were numerous alarms of pending large-scale Comanche raids in North Texas, most all of the action happened around the Rio Grande. The Comanches had a very profitable business providing badly needed horses to the migrating goldseekers, and their profit margins were high because they were stealing their inventory in Mexico. Since the United States agreed to protect Mexico from Comanche raids as part of its war settlement, the eastern forts were closed and many of the troops were relocated to the border forts.

Soldiers relocated to the new western forts needed beef and soon cow camps began to spring up near the Fort Worth to Fort Belknap Road. Cow camps became ranches and after houses replaced tents, families moved in to join the men.