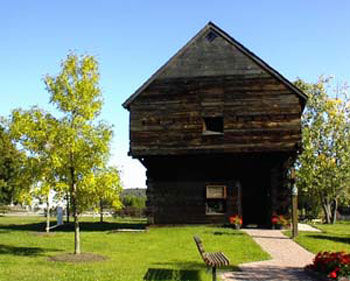 Stillwater, New York, was named for the calm waters of the Hudson River. This small village, just north of Albany, is built along the banks of the river, close to the Saratoga National Historical Park and near Saratoga Lake.

Despite the name the local history hasn't been calm - Stillwater was the site of first significant victory in the American Revolutionary war.  The "Battle of Saratoga" on October 7, 1777 forced the British troops, led by General Burgoyne, to surrender and led France to enter the war on behalf of the Americans.

This battle is renowned as the turning point of the Revolutionary war.

During the tumultuous years prior to the war, 18th century communities were often caught in the middle of British and French armies seeking sovereignty over New York and in Native American raids.  Communities often built blockhouses in which they could gather together for safety and to fend off their enemies.

Timbers from Revolutionary war structures at the Saratoga National Historical Park were used to construct a blockhouse replicating an original 18th century structure.  Originally known as the "Battlefield Blockhouse", it was later moved to the village of Stillwater.

The Stillwater Blockhouse is located in a riverfront park with paths meandering down to the shore of the Hudson.  Visitors can see "loopholes" used to shoot muskets through, colonial era artifacts and photos from earlier days in Stillwater. The Blockhouse is open from Memorial Day Weekend until Columbus Day Weekend. The hours are from Wednesday to Sunday from noon until 4 pm. There is no admission fee but all donations are gratefully accepted.