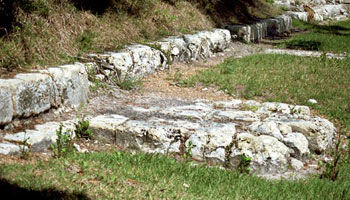 The past four centuries numerous New World travelers have staked their claim at historic San Marcos de Apalache. The site's history began in 1528 when Panfilo de Narvaez arrived with 300 men. Having traveled overland from Tampa, Narvaez, impressed by the area located in historic St. Marks at the confluence of the Wakulla and St. Marks rivers, built and launched the first ships made by white men in the New World.

In 1539, Hernando de Soto, along with 600 men, followed the same route taken by Narvaez. Banners were hung in the trees near the river to easily mark the river's entrance. (A lighthouse now stands near the site.)

By 1679, the Spanish Governor of Florida started construction on the first fort built at the junction of the two rivers. The logs used were coated with lime to give the appearance of stone. The fort stood only three years, then was burned and looted by pirates. Not until 1718 did Captain Jose Primo de Ribera arrive to construct a second wooden fort.

Construction was begun on the first stone fort in 1739. Progress was slow, and the fort was less than half complete when it was given over to the English in 1763 as a result of the war with Spain.

By 1787, Spain regained control of the fort, reoccupying it for 13 more years. Spanish rule was challenged in 1800 by a former British officer named William Augustus Bowles. Bowles attempted to unify and lead an independent Creek nation of 400 Indians against the Spanish, eventually capturing San Marcos. His rule ended five weeks later when the Spanish returned with a flotilla of nine ships to retake the fort.

Because of continuous Indian raids into Georgia from Spanish Florida, General Andrew Jackson invaded the territory in 1818 and took San Marcos. Two captured British citizens, Robert Ambrister and Alexander Arbuthnot, were tried and found guilty of inciting Indian raids. Jackson executed both of the men, creating a diplomatic crisis between the United States and Great Britain.
Jackson then withdrew from San Marcos, leaving the fort once again in Spanish hands.

In 1821, Florida was ceded to the United States, and U.S. troops were sent to occupy the fort. Three years later, the fort was abandoned and turned over to the Territory of Florida. By 1839, the fort was returned to the U.S. Government and construction of a federal marine hospital began 18 years later utilizing stones from the spanish fort. The hospital, which was finished in a year, provided much needed care for victims of yellow fever.

The final confrontation at San Marcos occurred in 1861 when the Confederates took the fort, renaming it Fort Ward. A Union squadron blockaded the mouth of the St. Marks River from 1861 until 1865. The Battle of Natural Bridge eventually stopped the Union force that apparently intended to advance onto the fort from the rear.

A well marked trail complete with informative brochure now takes visitors on a journey through the historic fortification ruins. A visitor center containing exhibits and artifacts covering the area's history is built on the foundation of the old marine hospital. The historic site and visitor center are open from 9 a.m. until 5 p.m. Thursday through Monday and closed on Thanksgiving, Christmas and New Year's Day.