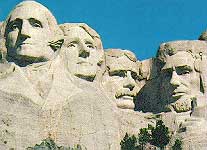 Mount Rushmore National Memorial, located 23 miles southwest of Rapid City, is something you don't want to miss. It's the greatest FREE attraction in the U.S.!

"Until the wind and the rain alone shall wear them away." Those are the famous words Sculptor Gutzon Borglum used to describe the length of time his most famous work, Mt. Rushmore, will endure.

The mountain itself was originally named after Charles E. Rushmore, a New York lawyer investigating mining claims in the Black Hills in 1885. Gutzon Borglum chose this mountain due to its height (5700' above sea level), the soft grainy consistency of the granite, and the fact that it catches the sun for the greatest part of the day. The presidents were selected on the basis of what each symbolized. George Washington represents the struggle for independence, Thomas Jefferson the idea of government by the people. Abraham Lincoln for his ideas on equality and the permanent union of the states, and Theodore Roosevelt for the 20th century role of the United States in world affairs. The carving of Mt. Rushmore actually began on August 10, 1927, and spanned a length of 14 years. Only about six and a half years were spent actually carving the mountain, with the rest of the time being spent on weather delays and Borglum's greatest enemy - the lack of funding. The total cost of the project was $900,000. Work continued on the project until the death of Gutzon Borglum in 1941. No carving has been done on the mountain since that time and none is planned in the future.

The granite faces of four American presidents' is scaled to men who would stand 465 feet tall! President Calvin Coolidge believed Mount Rushmore was "decidedly American in its conception, magnitude and meaning. It is altogether worthy of our country," Coolidge proclaimed at the dedication of the project in 1927.

The most spectacular program at Mount Rushmore is the evening lighting ceremony held in the new amphitheater, 9:00 p.m. sharp. A must see when you are touring the beautiful Black Hills of South Dakota.

A $56 million redevelopment was completed in 1998 with the addition of a new parking structure, amphitheater, museum/theater complex, Visitor Orientation Center, Presidential Trail, gift shop, bookstore, and dining facilities. To complete your Rushmore experience, view the evening lighting ceremony. The National Park Service sponsors a special program Memorial Day through Labor Day. It consists of a 10-minute talk followed by a 20-minute film. The highlight of the evening is the slow exposure of light to the monument until it is fully illuminated. It's a good idea to go early and bring a jacket. Program times are as follows: 9:00-9:30 p.m. lighting ceremony, 9:30-10:30 p.m. illumination. For these traveling in the off season, the faces are illuminated nightly. There are few people who are not subdued by the moments as they gaze upon the beauty of Mt. Rushmore. Just as the monument challenged its creator, so should its splendor challenge its viewer.