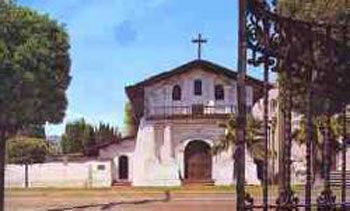 The Mission, located at Dolores and 16th Streets, is open every day except Thanksgiving, Christmas, and Good Friday. It is included in the Barbary Coast.

Trail self-guided walking tour and is accessible by
auto, bus, and BART.

The story of Misión San Francisco de Asis (popular name of Mission Dolores) began some 220 years ago. It was in March, 1776, that a scouting party under the direction of Lt. Don Jose Joaquin Moraga visited the area and named the small stream and lake after the Saint of the day, Arroyo de Nuestra Señora de los Dolores (Lake of Our Lady of Sorrows). He returned to Monterey to convey the news and received his commission to establish a presidio and mission in the name of Carlos III of Spain. His expedition of soldiers, colonists with wives and children, and two Franciscans arrived on June 27, 1776, to pitch their camp near the Lake. On June 29, Fras Francisco Palou and Benito Cambon celebrated Mass in honor of the feast of Saints Peter and Paul on the shores of the small lake. This would be the site of the future Mission, but the date of June 29th would become the official birthday of the City of San Francisco. Of the 21 California Missions, this is the third most northerly, and the sixth to be established under the direction of Father Junipero Serra.

Misión San Francisco de Asis is situated in the very heart of a bustling international seaport city on a tree-lined boulevard, overshadowed by a majestic Basilica on the north and quaint Victorian row houses and apartments on the south. Just outside the rough-hewn redwood doors and sitting in the middle of a grassy median strip is the Mission Bell heralding the renowned El Camino Real or King's Highway. The Old Mission is designated as Registered Landmark Number One and is very near the geographical center of the City of San Francisco. It is whitewashed adobe brick under a tiled roof. The facade is extraordinary in that it appears to have four huge columns supporting a second story balcony housing six more smaller columns and three bells. It is a wonder that the entire facade is fashioned from a single block of adobe bricks 10 feet thick, 22 feet wide set on a foundation of rock four feet below the surface.