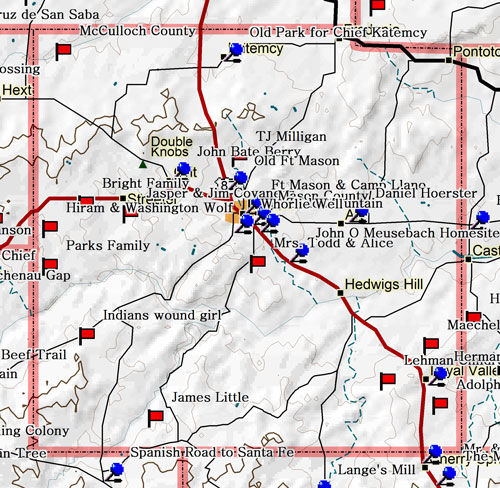 Marker Title: John Bate Berry
City: Mason vicinity
Year Marker Erected: 1977
Marker Location: take SH 29 approximately 4 miles west to Grit Cemetery (in central part of cemetery).
Marker Text: (1813 - 1891) Forefathers resisting America's foes on many frontiers inspired John Bate Berry, who came to Texas from Kentucky in 1826. He fought (1835-36) in the Texas War for Independence and in the 1842 Mier Expedition to stop Mexican raids on the Republic of Texas. Captured, imprisoned, then freed in 1844, he scouted for the American army in 1846, during the Mexican War. Later he married, lived in this locality, and fought to make frontiers safe for settlement. (1977)

Marker Title: Fort Mason and Camp Llano, C.S.A.
City: Mason
Year Marker Erected: 1964
Marker Location: County Courthouse Square (southeast corner).
Marker Text: Fort Mason, located 5 blocks south, was headquarters for the first regiment Texas Mounted Rifles 1861-62. These Confederate troops occupied the line of old U.S. forts to give protection against Indians. 215 prisoners-of-war were confined here. In spring 1862, the line of frontier defense was tightened and Camp Llano was established 9 miles east. Texas Frontier Regiment occupied this post, part of a line a day's ride apart on horseback from the Red River to the Rio Grande. Settlers then used Fort Mason for protection. Scouting parties and patrols of Confederate and state troops visited the post in aggressive warfare to keep Indians near their camps and away from settlements. Upon secession Mason County men joined regional, state and Confederate troops to protect the frontier. They usually had to supply their own guns, mounts and sustenance. Although large-scale raids had been checked, Indians roamed this area, stealing horses, attacking isolated farms, burning buildings, kidnapping women and children. However, an old Mason pioneer operated a one-mule stage route between Camp Colorado, Mason and Fredericksburg. Hiding from Indians at night, he and his mule made the trip every two weeks carrying the mail without mishap. (1964)

Marker Title: Old Fort Mason
City: Mason vicinity
Year Marker Erected: 1965
Marker Location: 1 mile north of Mason on US 87 in roadside park at junction of Us 87 and US 377.
Marker Text: Situated near a spring long used by Indians; built of stone quarried from post hill. Fort helped protect Texas frontier from Indians. Colonel Robert E. Lee, stationed in Texas 2 years, commanded Fort Mason from February 1860 to February 1861. Here he made his decision as to his part in the Civil War, saying: "If the Union is dissolved,...I shall return to my native state and...save in defense...draw my sword on none". He left Fort Mason February 13, 1861. In wartime he remembered "the enemy never sees the backs of Texans". (1965)

Marker Title: Fort Mason, Site of
City: Mason
Year Marker Erected: 1936
Marker Location: Near the corner of Post Hill St. and Spruce, on Spruce.
Marker Text: Established July 6, 1851 by the U.S. Army as a protection to the frontier. Named in honor of Lieut. George T. Mason, killed in action near Brownsville, April 25, 1846. Albert Sidney Johnston, George H. Thomas, Earl Van Dorn and Robert E. Lee, of the 2nd U.S. Cavalry, were stationed here at intervals from 1856 to 1861. Evacuated by Federal troops, March 29, 1861 and reoccupied after the Civil War until 1869. (1936)

Marker Title: Lehmann, Herman and Willie
City: Loyal Valley
Year Marker Erected: 1991
Marker Location: From Loyal Valley take House Mountain Rd. approx. 0.2 miles to Loyal Valley Cemetery cemetery.
Marker Text: German immigrants Moritz and Auguste Lehmann settled along so-called "Squaw Creek" (4 mi. W) in the 1850s. After Moritz's death, Auguste married Philip Buchmeier on May 16, 1870, two of the Lehmann children, Herman (age 10) and Willie (age 8) were captured by Apache Indians. Willie was released after five days and returned home, but Herman remained with the Apache and Comanche Indians for eight years. He was returned to his family by U.S. Soldiers in 1878 but maintained his ties to Quanah Parker's Comanche family, into which he had been adopted, for the remainder of his life. (1991)

Marker Title: Homesite of John O. Meusebach
City: Mason vicinity
Year Marker Erected: 1969
Marker Location: 18 miles south of Mason on US 87 to right-of-way at the intersection of US 87 and RR 2242.
Marker Text: By 1848, German colonization reached area under direction of John O. Meusebach, who succeeded Prince Carl of Solms-Braunfels as colony leader and who signed treaty with Comanches allowing peaceful settlement of the land between the Llano and San Saba rivers. He later retired here to a 640-acre farm where he died. His colonists have influenced Texas through their ingenuity, thrift and enterprise. They came seeking political and personal freedom and remained to create a unique culture through their blending of German custom with American necessity. (1969)

Marker Title: Dizenia Peters Todd
City: Mason vicinity
Year Marker Erected: 1975
Marker Location: 2.5 miles south of Mason on RR 1723, then 1 mile southwest on RR 2389 to cemetery.
Marker Text: (Aug. 5, 1826 - Jan. 1865) Born in Mississippi, Dizenia Peters moved to Texas with her parents about 1835. She married William P. Smith in 1844 and had a son, James. After Smith's death, she married George W. Todd (1827-1901) in 1851; they had 3 daughters. Todd and members of his wife's family settled this area in the 1850s and were among the first Mason County officials. Mrs. Todd and a black servant girl were fatally wounded in an Indian attack near this site and buried in adjacent unmarked graves. Recorded - 1975

Marker Title: Two Sheriffs of Mason County
City: Mason
Year Marker Erected: 1980
Marker Location: 0.5 mile nort of courthouse on US 87 right-of-way.
Marker Text: A native of Kentucky, Thomas S. Milligan (1810-1860) moved to this area in 1855 and operated a change station for the stage line. He was also a rancher and supplied beef to the soldiers at Fort Mason. Shortly after Mason County was organized in 1858 he became the first elected sheriff. Two years later he was killed by hostile Indians near his home (1.6 mi. NW). His grandson Allen Thomas Murray (1880-1929) became county sheriff in 1924 and like his grandfather died in the line of duty. He was killed by a bootlegger near this site in 1929. (1980)

Marker Title: Whorlie Well
City: Mason
Year Marker Erected: 1971
Marker Location: on RR 1871, near the corner of Westmoreland and Avenue F.
Marker Text: Named for a victim in famous "Hoodoo War", provoked by cattle rustling in Mason County. John Whorlie (or Worley), a deputy sheriff, on May 13, 1875, lost a prisoner to a lynch mob on Aug. 10, 1875, Whorlie was killed and scalped while working on this well. His killer was identified as Scott Cooley, a friend of the lynched man. Masonic burial for Whorlie was conducted by the McCulloch Lodge No. 273, A.F. & A.M., of which he was a member. No one in Mason County was ever convicted for wrong doing in the "Hoodoo War", but after 1876 law, order, and peace were restored. (1971)

About 1874, Jasper and Jim Covaness, sons of Robert Covaness, who lived six miles west of Mason on the Mason-Junction road, were out one evening hunting a deer about two miles south of their house, when they saw several Indians coming through the roughs. Apparently the Indians had not discovered the boys but Jasper fired with his Winchester and when he did, and Indian fell backward from his steed. The two boys then hurried home.