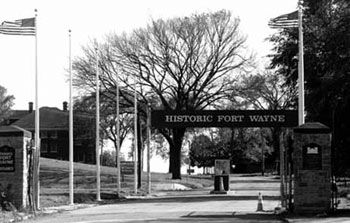 Fort Wayne is located at the foot of Livernois Avenue, fronting on the Detroit River, which at this point is about a mile wide to the Canadian shore.

The underlying reason for thus locating Fort Wayne has never been fully explained, even by army experts, because the fort as such, was never used for military purposes, except for housing troops. The moat around the fort proper, was neverfilled with water; in fact, no provision for filling it has ever been indicated by, or on any of the engineering drawing.

The fort was built over the years 1844-47 when tensions were high along the border with Canada. There was talk of war with England over a border dispute concerning the Oregon territory and the entire U.S.-Canadian border was being fortified.

The War of 1812 was still a fresh memory. The British captured Detroit during that conflict and local Indian tribes had sided with the British, slaughtering an army of Kentuckians at Monroe. 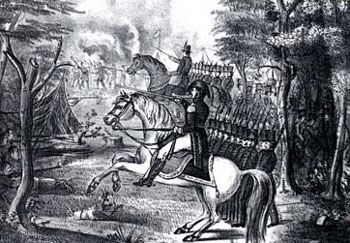 During Canada's patriot War of the 1830's, Canadian revolutionaries attempting to overthrow English rule were sheltered and armed by American sympathizers in Detroit.

With feelings running so high, Detroiters demanded a stronghold to protect the city from British and Canadian assault.

Fort Wayne was built on a military campsite that dated back to 1796. The new fort was named after Gen. Anthony Wayne, who gained fame in the Revolutionary War and later in campaigns against the Indians.

The threat of war with Canada faded but the new fort grew in importance as the possibility of war with the southern states loomed.

The fort expanded from campsite to full fledged fort status with the outbreak of the Civil War, and became a training ground for volunteers on their way to Civil War battlefields.

No siege ever threatened the base of masonry and brick seven and a half feet thick and none of the six brass cannons were ever used, nor were any of the guns mounted 'en barbette' fired over the parapet.

The fort played a major role in both world wars. During the first world war it served as motor supply, labor, construction and engineer unit headquarters and housed both a motorcycle company and an aero squadron.

Currently - Since it was closed to the public in 1992, nothing has been done to the Fort other than occasional lawn maintenance. The buildings are in dire need of repairs with some buildings near collapse. City officials estimate the repairs to be near $20-Million. The real problem here is that a piece of American History is being neglected and we as citizens don't even enjoy the right to view our historical site. The only events that occur are soccer games on the parade grounds and an occasional flea market put on by the museum. The Fort is still owned by the City of Detroit and run by the Detroit Historical Museum. On site are the original Fort, the added buildings built in the 1930's, Indian Burial Mound, Great Lakes Indian Museum and the Tuskegee Airmen Museum. There are also warehouses on site stuffed with historical artifacts, ranging from old cars to authentic costumes. The complex includes a 12-acre parade ground.

We received the following e-mail updating us on the progress of Fort Wayne.

Hello, I just stumbled across your web page relating to Fort Wayne, Detroit. I thought you might want to know that there have been some developments in the upkeep and ownership of this fort.

This is the site of a volunteer organization that has been doing minor upkeep projects around the fort as well as facilitating historical reenactments on the fort grounds. Within the last 6 months, approximately $2 million in bond money has been freed up and spent to renovate some of the barracks building inside the star fort as well as part of a close-by building. An additional $10 million that has been set aside in Wayne County coffers is currently being sought to make additional fixes and improvements to the site.

Visit the Historic Fort Wayne Coalition and ask the proprieters of the site for more information.

The following picture and story is from the book, Encyclopedia of American Indian Wars, by Jerry Keenan. 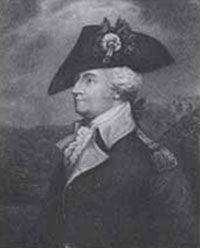 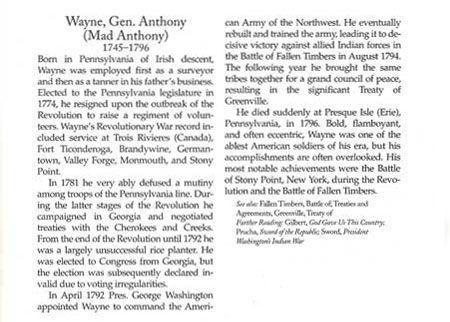